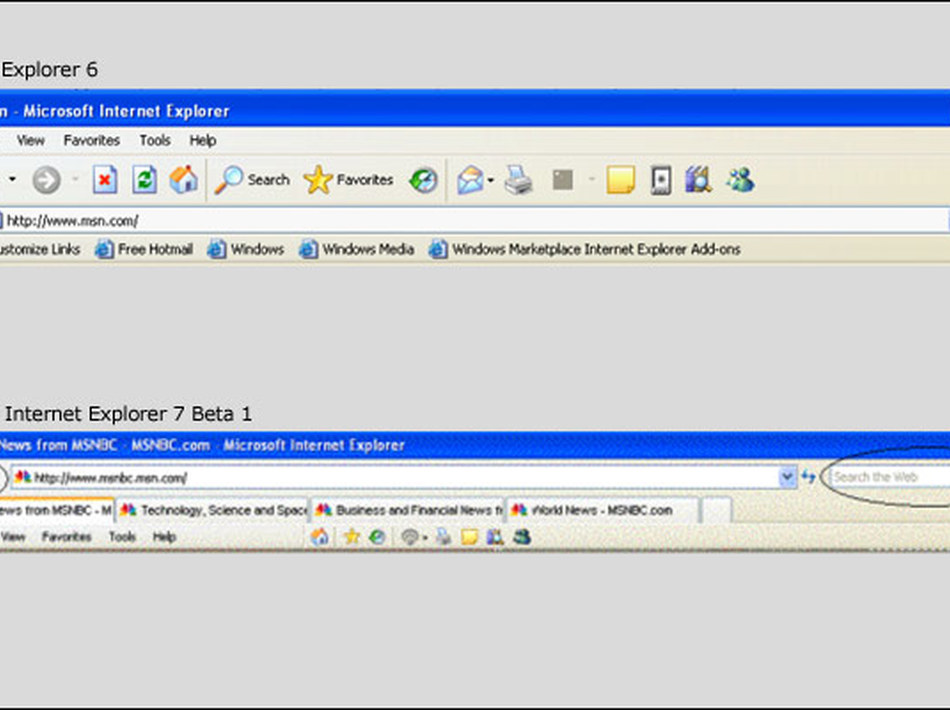 Microsoft made available to beta testers on Wednesday (July 27, 2005) two slightly different test versions of Internet Explorer (IE) 7.0, the next version of the company’s Web browser.

Microsoft included IE 7.0 bits in the Beta 1 build of Windows Vista that the company began distributing, via download, to beta testers on Wednesday. It also released a separate beta of IE 7.0 that currently will run on Windows XP Service Pack (SP) 2 machines only. (Ultimately that standalone beta will run on Windows Server 2003 and Windows XP Professional x64 systems, too.)

Microsoft made the standalone IE 7.0 Beta 1 version available only to the same set of testers that are part of the Vista beta program.

“We are using the same distribution channels (for IE 7.0 Beta 1) as Vista is,” said Gary Schare, a director of product management with Microsoft’s Windows client unit. Those include Microsoft Developer Network, TechNet and Microsoft Connect for the pre-selected individuals who are part of the Vista beta program.

Both beta versions of IE 7.0 contain almost the identical core set of features and functionality.

One difference between the two is temporary, according to Schare. The IE 7.0 beta that runs on XP SP2 includes the new phishing filter that Microsoft has designed to be part of the product. The IE 7.0 bits that are part of Vista Beta 1 does not yet include the filter, but it will do so by the time Microsoft releases Vista Beta 2. The reason for the discrepancy was purely scheduling, Schare said. The Vista team froze the Vista Beta 1 code before the filter was ready for inclusion.

Another difference between the standalone IE 7.0 and the version of the browser that will be embedded in Vista is permanent. The IE 7.0 code that is part of Vista will be set as a low-rights client by default. The standalone IE 7.0 browser won’t be.

“In the final release, the Vista version of IE will be a superset of the one that Microsoft will release for XP (and other versions of Windows),” Square explained.

Beta 1 of IE 7.0 includes many of the features that Microsoft had been expected to deliver in the product, including support for tabs, built-in RSS feed support, better support for Cascading Style Sheets (CSS), and transparent portable network graphics (PNG) support. It also includes a toolbar search box that is designed to replace third-party search toolbars, as well as support for shrink-to-fit printing.

The two different Beta 2 versions of IE 7.0 may or may not be released in tandem, Schare said. According to a new Microsoft IE 7.0 white paper, Microsoft is endeavoring to release Beta 2 of the standalone version of IE 7.0 before the end of calendar 2005. Beta 2 of Vista is not expected to go live until sometime in the first half of 2006.

Beta 2 of IE 7.0 will include more new features around tabs, more advanced RSS functionality and the addition of “Protected Mode” support. Protected Mode is how Microsoft is looking to protect users against “elevation of privilege” attacks by preventing IE 7.0 from being able to modify user or system files and settings.

Microsoft is still not committing to a final delivery target for the standalone version of IE 7.0, Schare said. Once Microsoft has a chance to evaluate tester feedback, it will have a better idea when the browser will be ready for release, he said. But Microsoft is endeavoring to release it “ASAP,” Schare said.

The IE 7.0 bits that are part of Vista will go live when Vista does. Vista is currently slated to ship in the second half of 2006.

Life Hacks to Live By
4 Ways To Freshen Stale Indoor Air This Winter
September 22, 2022
7 Things Every Person Beginning Woodworking Needs to Know
May 18, 2018
How To Save on Holiday Shopping
December 05, 2017
Ads
Stay Connected
Where to buy medications ? How to cure impotence with pills? You can buy sildenafil australia online easily. For Thai customers look at priligy thailand online. In Singapore find viagra singapore for sale.