HomeLifestyleHacks for Living a Happy LifeHow Do Tarot Cards Work? A Guide on the Important Things to Know

How Do Tarot Cards Work? A Guide on the Important Things to Know 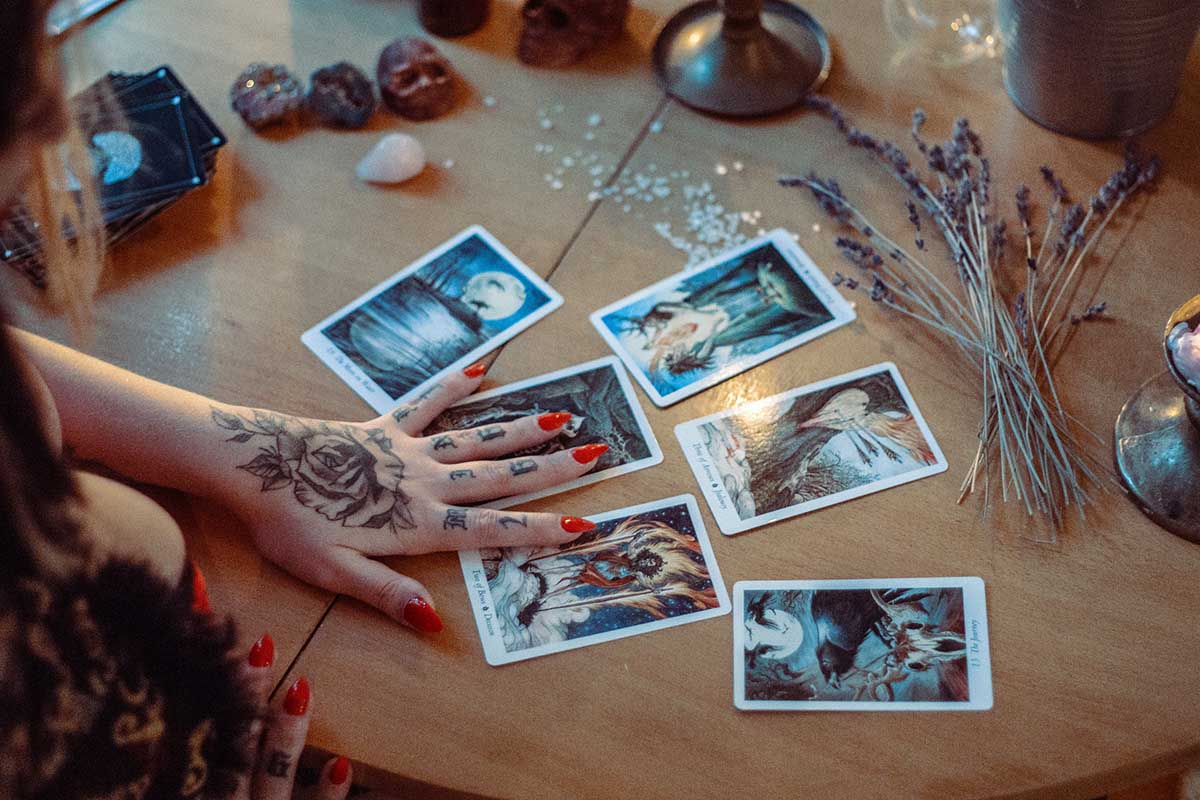 How Do Tarot Cards Work? A Guide on the Important Things to Know

Are you wondering how do tarot cards work? If yes, you should check out our informative guide here on the important things to understand. What if we told you we could grant you the power to see the future? To give you a map of your future, so you knew exactly what course to take to get the life you wanted?

Why wouldn’t you grab this in a heartbeat? Alas, this power doesn’t exist. But something pretty darn close does exist, and it’s tarot cards. This opens up a new can of questions, however with a quick guide to reading tarot online.

How do tarot cards work?

Well, you don’t have to ponder those questions any longer. We’re here to tell you all about tarot cards and the magical meanings behind them. But enough preamble: let’s get started.

What Are Tarot Cards? 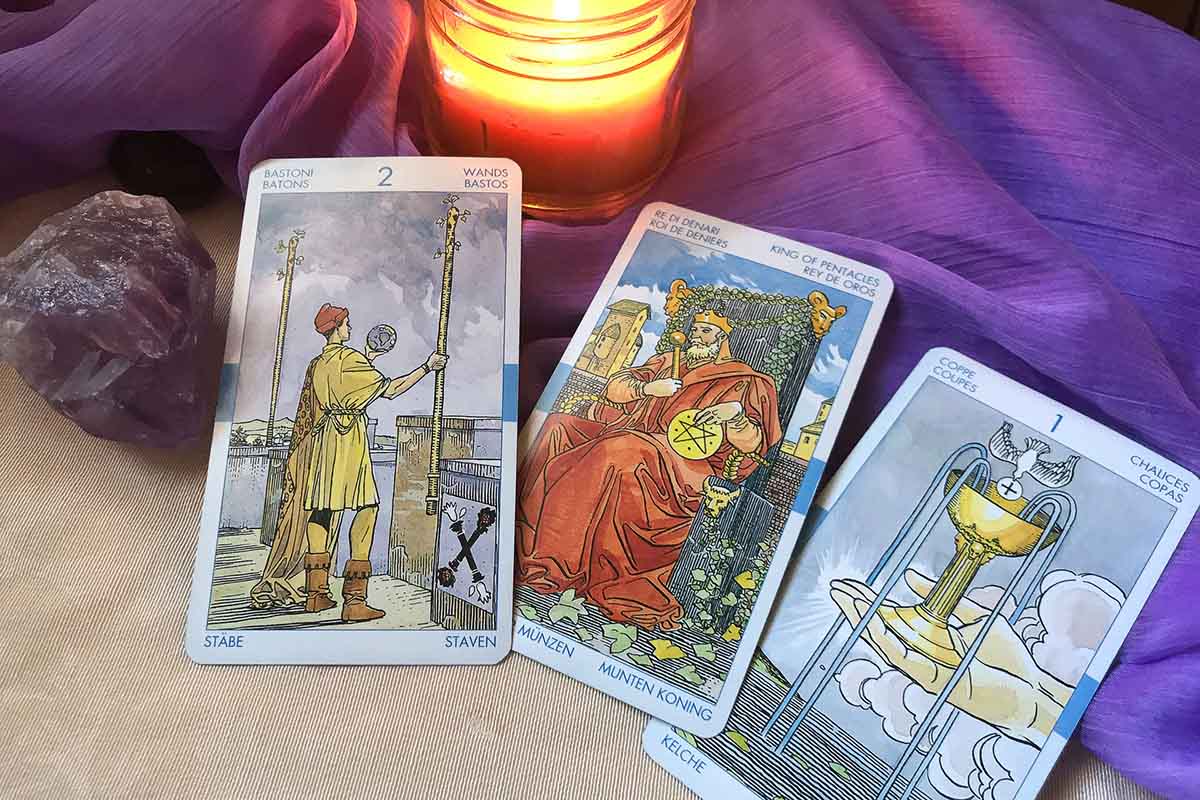 Tarot cards operate off a deck of 78 different cards that each carry a name and symbol of some kind. Within the deck, there exist two “classes” of cards: major arcana and minor arcana. The major arcana meaning tends to revolve around large forces like karmic flow or a central theme (don’t worry, we’ll try to minimize the high school English flashbacks). 22 of these cards exist, with the Fool the only major arcana card without a number.

Meanwhile, minor arcana cards work more in the present tense. They reflect what struggles or events you’re currently enduring. There are 56 of these cards, and they have four different suits (like a deck of playing cards).

The Suit of Cups focuses on your emotions and connections to others, regardless of whether the connections are romantic, platonic, antagonistic, or otherwise. The Suit of Pentacles focuses on the material world, like your wealth, job, or everything you own.

The Suit of Swords is more direct, focusing on your actions or thoughts and how you are affecting the world around you. Finally, there is the Suit of Wands, which pertains to your drive and passion in life. Each suit categorizes like a deck of cards too.

The only difference is that tarot suits have one extra “face” card instead of the jack/queen/king set of a traditional playing card deck. The face cards to tarot decks are the page, the knight, the queen, and the king. While minor arcana cards tend to all work around their suit’s general idea, major cards have their unique purpose.

The History And Tradition Of Tarot Cards 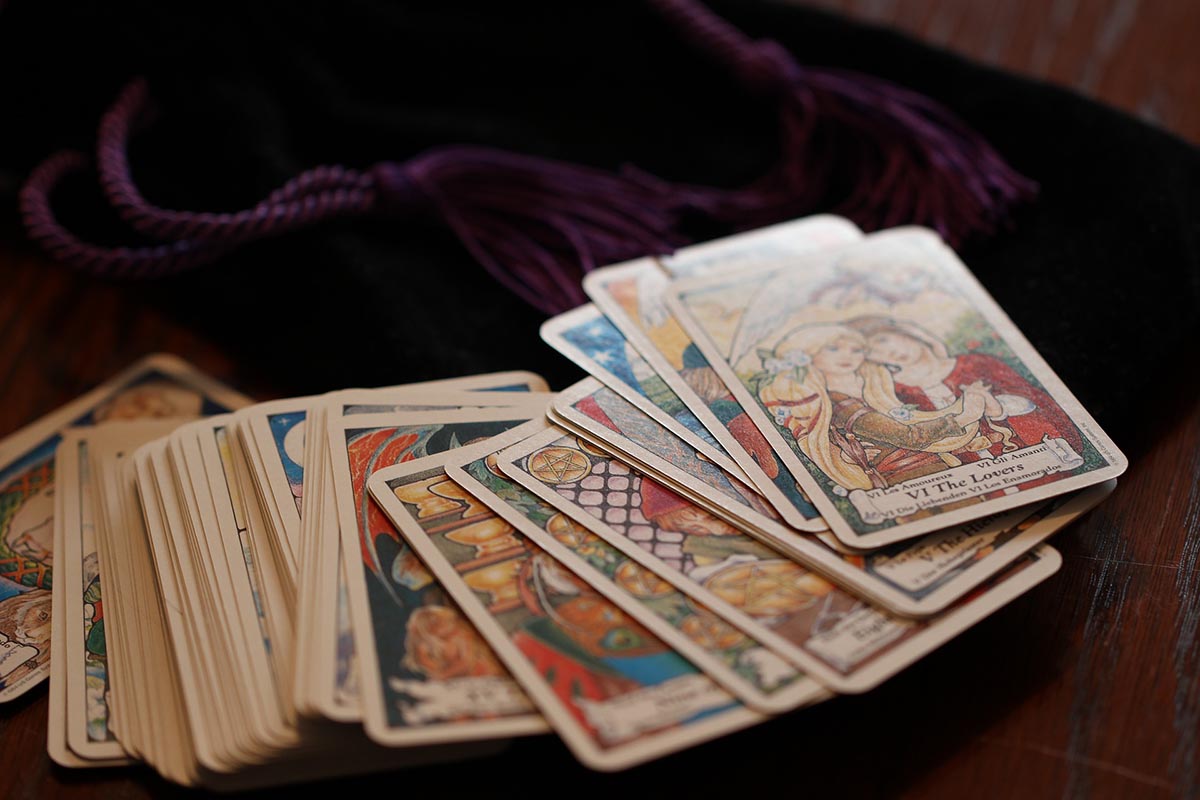 Tarot cards are not a recent discovery: in fact, they’ve been around for centuries. Tarot cards started as playing cards around the 14th century in France and Italy. Royals or nobility would even commission artists to make them their set of cards.

Tarot cards got their mystical origins 200 years later when people began assigning individual meaning to the cards and using them for divination (or foretelling the future). The “guide” we use today originated in the early 20th century through the team of two individuals named Arthur Waite and Pamela Colman Smith.

They met through their shared membership of the Order of the Golden Dawn, a secret society who researched the occult and metaphysical. Waite encouraged Smith to draw inspiration from the original Sola Busca deck with the art, and the Waite-Smith deck caught on like wildfire.

How Do Tarot Cards Work?

So now that you know what the heck these cards are and where they come from, how do you use them? Well, the first important lesson to remember is not to treat the cards as a fortune-telling device. The spiritualism of tarot cards evolves and changes, and the cards are more meant to act as a reading of a person. Rather than tell you your future clear-cut, tarot cards look inside you and tell you what you are dealing with and what sits on the horizon.

It’s believed that when you shuffle your tarot deck, you are infusing your energy into the deck. Thus, handling the deck with uncertainty or doubt will skew the results the deck provides. After you shuffle the deck, you place the cards in a specific spread. The spread you choose is dictated by what you or the person you are reading the deck for wants to “ask” the deck.

For example, if you are using the deck to deal in the avenue of romance, using the relationship spread is the one you would want to take. Or if you wanted to get a general overview of how your life is going, the popular cross and triangle spread is the spread for you. 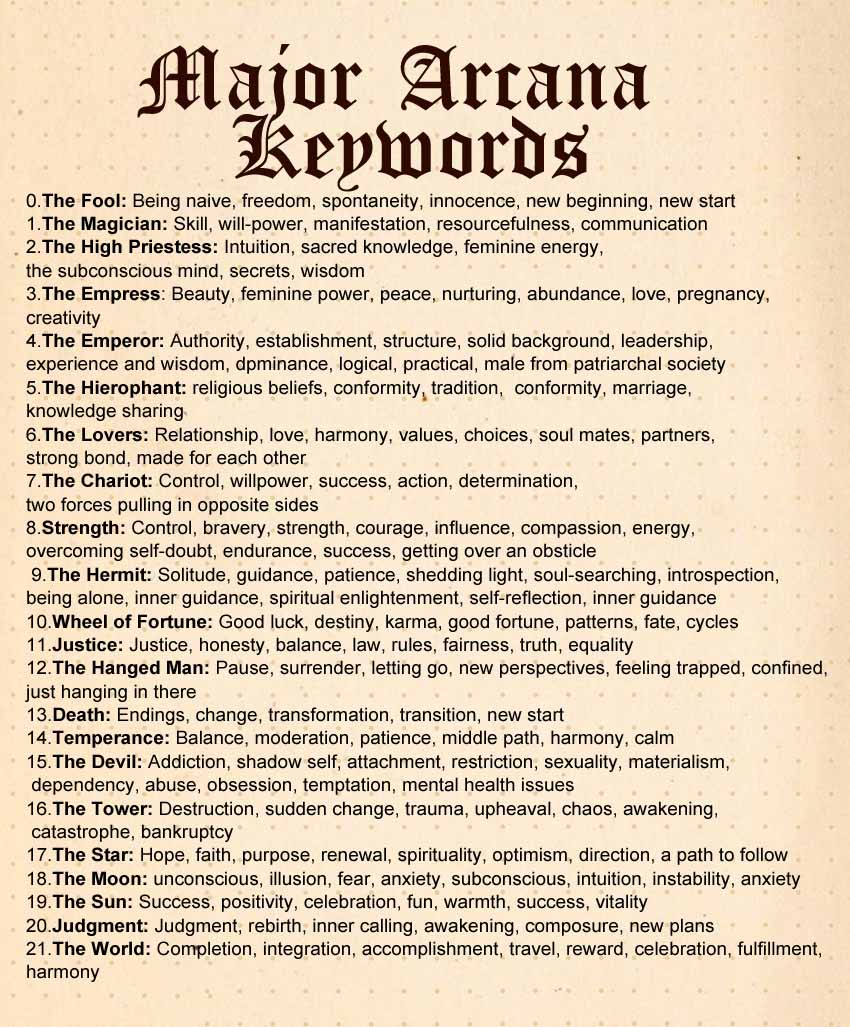 Once the cards hit the floor in the desired order, you then read the cards in any order you feel is right. Specific spreads have specific orders by which to read the cards, but these are only guidelines.

Try to keep in mind that the cards are not providing instructions so much as they give you a general picture of what is happening in your present and future and what you could do to change this destiny.

That’s another thing to remember about tarot cards: no future they predict is set in stone. The cards’ whole point is to show you a possible path and allow you to change your fate if you find it distasteful.

Where Does The Power Of Tarot Cards Come From? 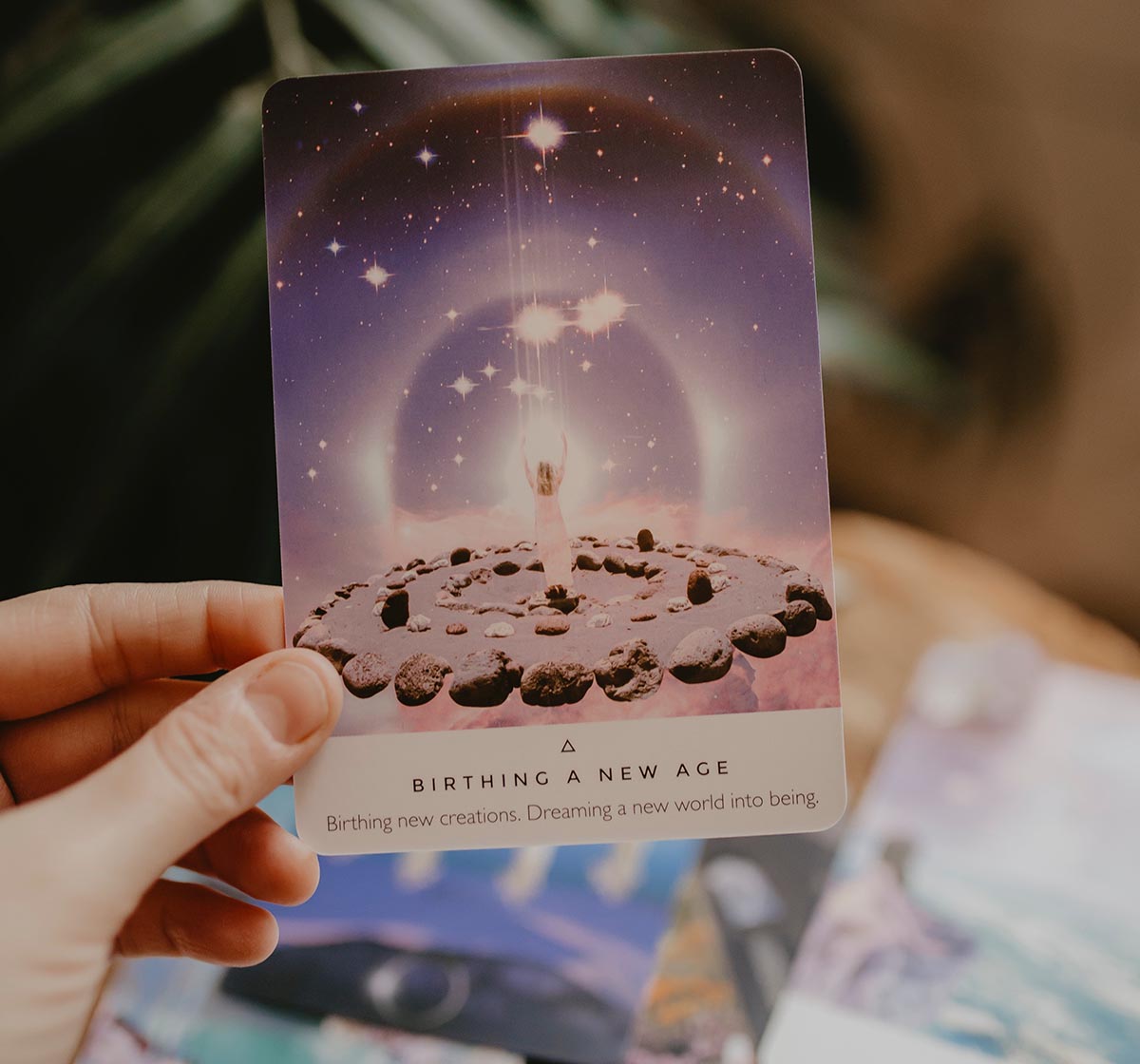 It’s only natural to wonder where the power of the cards comes from, but the answer is that no one knows. Some people attribute the magic of the cards to be from a higher power or universal force.

Those gifted with psychic abilities and even those who only read the cards recreationally instead see the cards as conduits to tap into this sort of knowledge.

Go Forth Reader Of Cards

Now that you know the answers to such questions as “what are tarot cards” and “how do tarot cards work,” what will you do with this knowledge? If you’re interested in learning more about tarot and other recreational activities, check out some of the other posts on our blog! So get out there and carve your destiny! After all, in the wise words of Doc Brown, “Your future is whatever you make it!”

Life Hacks to Live By
Local VS Long Distance Move: Best Long-distance Movers Expla...
February 19, 2022
What Does It Take to Become a Pilot?
December 07, 2020
Which Health Supplements are Best to Take When Following an ...
September 24, 2018
Ads
Stay Connected
Where to buy medications ? How to cure impotence with pills? You can kamagra australia online easily. In Thailand see priligy thailand online. In Singapore best place is viagra singapore for sale.