What the 1918 Spanish Flu Pandemic Can Teach Us About Coronavirus 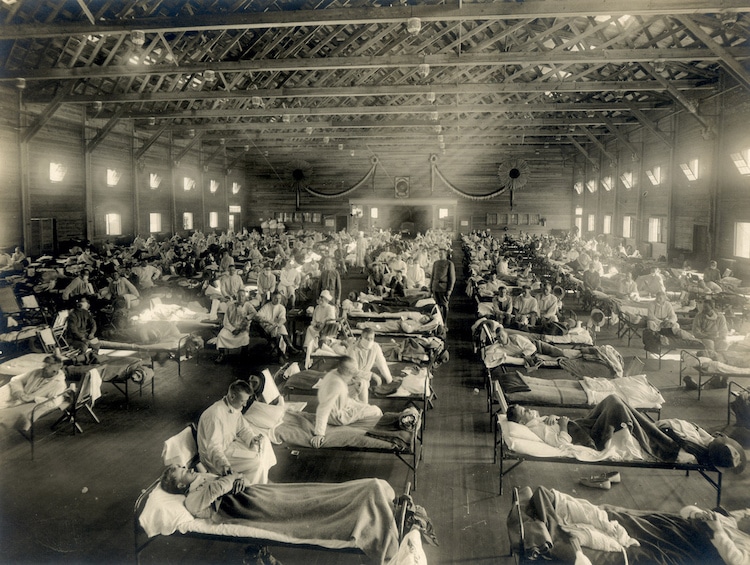 Emergency hospital in Kansas during the Spanish flu influenza pandemic

What the 1918 Spanish Flu Pandemic Can Teach Us About Coronavirus

Today’s generation is by far scared by the global epidemic, namely COVID-19, the coronavirus.

Governments are humbled, institutions alarmed, and the world superpowers left without say, due to the numbers this pandemic is claiming worldwide.

Many would say; indeed, there has never been such a thing!

But if history is something to go by, we meet a far much deadlier epidemic in 1918, the Spanish flu.

This flu-infected 27% of the then global population and killed up to 100 million people.

What made this flu deadlier was overcrowding, poor hygiene, and malnourishment.

I believe there is a lot we can learn for the past flu and make our current situation even better.

Similarly to today, the governments of the day downplayed the seriousness of the diseases.

Germany, the US, France, and the UK dint report the flu, amid World War I.

Spain, which was neutral, reported on the pandemic, creating the impression that the country was hardly hit by the epidemic, thus the name Spanish flu.

Today, the US has been criticized for slow testing, and Italy scrutinized for the highest number of cases.

Among the measure taken by Italy to combat the disease was social distancing and lockdown.

The governments of the world are encouraging proper hygiene and canceling social gatherings to stop corona spread.

Looking at history, this is a desirable step. Many countries have already barred international flights.

The case of Diamond Princess cruise, however, shows how close quarters can cause the infection to spread rapidly.

Sports and other events have since been canceled. Festivals such as SXSW and Coachella have canceled their events.

Ignoring the call to postpone all the events, we can look at the Spanish flu, where Philadelphia threw a parade to support the war.

This filled the streets with over 200,000 people in the spirit of solidarity. Three days later, the Philadelphia hospitals were brimming with dying patients from Spanish flu.

They abolished any gathering hosting over 20 people. They deployed social distancing so well. Reportedly, the city was said to have experienced less than half the per capita death of Philadelphia.

Indeed, the Spanish flu more serious than coronavirus by far. This means that corona is much likely to bow if we observe the right measures.

All that’s required is everyone, including those not showing any symptoms, to get on board and pull towards overcoming this common enemy.

According to Richard Hatchett, a physician and head of the Coalition for Epidemic Preparedness Innovations in London, those countries which swiftly embarked on the interventions for a start can’t compare with Wuhan happenings.

“You can compare the outcomes in Hong Kong, Singapore, and Taiwan, which used such interventions aggressively from the very start, with what happened in Wuhan and what is happening now in Iran and Italy,” shares Richard.

“There is no reason to expect the virus to behave differently in Europe and the US than it has in Asia.”

Given the real history, we have no option than to stay safe.

Never downplay the severity of this global epidemic.

One handshake or sneeze can continue the infection, and therefore, we need to take the simple guidelines to reclaim our normalcy sooner than later.

Learn more about the 1918 flu pandemic, also known as the Spanish flu.

Life Hacks to Live By
Interior Decorating Tips Every Design Enthusiasts Should Uti...
March 28, 2022
5 Ways to Prepare for Your Upcoming CPA Exam
February 24, 2020
How Safe is Your Home? 74% Of Burglars Enter Through The Fro...
January 13, 2019
Ads
Stay Connected
Where to buy medications ? How to cure impotence with pills? You can buy sildenafil australia online easily. For Thai customers look at priligy thailand online. In Singapore find viagra singapore for sale.