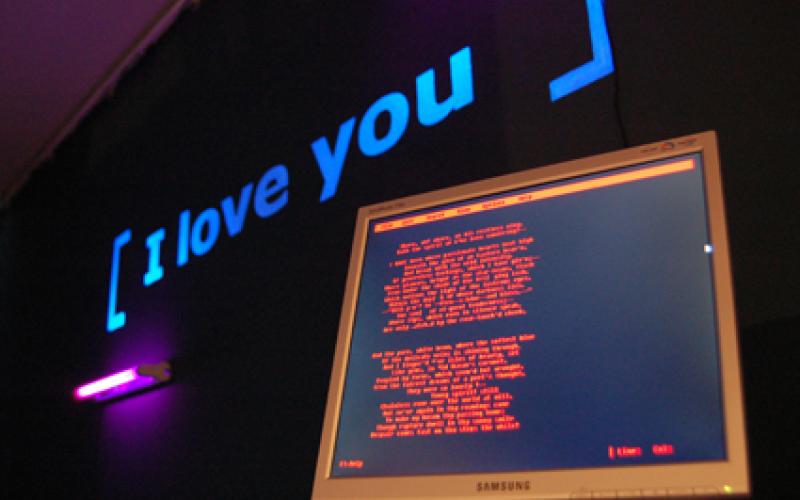 Providence (USA) / Copenhagen: The return of “Made in Germany” – “I love you [rev.eng]” (rev.eng = reverse engineering), the extension of the successful exhibition in Frankfurt devoted to the phenomenon of computer viruses, is going on an international tour. It can be seen from September 11th to October 4th at the renowned private Brown University in Providence, Rhode Island, USA, and then from October 7th to November 14th in the Museum for Communication in Copenhagen, Denmark.

Nowadays computer viruses are an integral part of our computerised everyday life. The damage to national economies caused by the more than 90,000 viruses that have already appeared worldwide runs into many billions. The independent US research institute Computer Economics puts the damage in the case of “I love you” in 2001 alone at 8.75 billion US $. But not all computer viruses are harmful. Computer viruses can also result from experimentation with (programming) language. “I love you [rev.eng]” is the first exhibition worldwide dedicated to the phenomena of computer security and computer viruses, and takes up both these aspects to carry out a controversial experiment with contemporary culture that goes far beyond current vehement debates on hacking.

“I love you [rev.eng]” is divided into political, technical and historical areas of investigation and focuses on the controversial positions of security experts and hackers, of net artists and programmers, of literature experts and code poets. What actually is a computer virus? Who creates them, and why? What sort of world is hiding behind these everyday phenomena? The exhibition provides background information, presents artworks, and reveals the role of computer viruses as a destructive force and economic threat as well as an inspiration for creative art. “I love you [rev.eng]” is conceived and presented by the cultural organisation digitalcraft.org based in Frankfurt, Germany.

“digitalcraft.org sees itself as a future oriented model for a changing understanding of cultural communication,” says Franziska Nori, the leader of the digitalcraft.org team. “The big question being raised by the exhibition as to what digital culture is today and will become in the age of the information society doesn’t only determine contemporary artistic and cultural production, but is also intended to motivate cultural institutions to rethink their practice and their own role.”

What can visitors to the “I love you [rev.eng]” exhibition expect?

– Computer viruses in close-up. At isolated terminals (“in the zoo”), visitors can activate infected data with viruses like “Sasser” or “Suicide” and force computers to close down. A presentation of the 30 year history of computer viruses and their technical development offers background information on the development of this phenomenon right up to the present day.

– Virus outbreaks in real time. An interactive 3D game world has been developed specially for the exhibition to allow visitors, by operating a joystick, to experience in real time the otherwise invisible processes involved in a global virus outbreak. Visitors can also click together their own viruses using a computer with so called virus construction kits like the ones often used by budding hackers to flood the Internet with evernew viruses.

– The web artists 0100101110101101.ORG and epidemiC present the computer virus “biennale.py”, which, over and above being a self-reproducing program, has been declared as a social work of art. The work “The Lovers” by the British artist Sneha Solankis creates, using two mutually-infected computers, an analogy between the distorted communication between the computers and that between lovers. ‘”I love you” [Šbut do you know what love really means?]’ by the artist Caleb Waldorf is an installation video montage reflecting how media represents the phenomenon of viruses and how governments and corporate entities react to the increasing threat of cyber terrorism.

– Insights into the heterogeneous culture of hackers with a broad spectrum of film material created in the scene itself, including “Freedom Downtime” by the New York hacker community 2600, and “Hippies from Hell”. Historical and current material provide insights into the development of the scene from its origins in the late 50s, when the term “hacker” was a neutral word for students at the MIT who lived out their fascination for logical tasks and enthusiasm for understanding the new computers, to the criminalisation of what is now known as the VX Scene, to the commercialisation of the phenomenon, supplemented by a wealth of interviews in which various virus authors talk about their motives.

– The aesthetics of the source code. Apart from its pure functionality, a program code (which computer viruses are based on, just like any other computer program) can also be an aesthetic and artistic creation. “Obfuscated C Codes” are examples of such highly virtuoso programming. The exhibition presents two exceptional contributions from the “International Obfuscated C Code Contest” that has been held regularly since 1984, the three-dimensional flight simulator by C. Banks (1998) and the Saitou.c Code by Don Yang (2000), a program with a graphic layout that generates a set of mutually reproducing programs.

– Internet security. Security concepts and current methods for preventing global attacks on the network are presented for an interested audience.

Through a collaboration with experts at Brown University’s Watson Institute for International Studies and researchers from Symantec – the market leader in internet security – digitalcraft.org further delved into the political, economic and social actuality of this subject. At both locations, the exhibition will be complemented by symposiums, in the USA with the theme “The Power and Pathology of Networks”.

The cultural organisation digitalcraft.org is taking up with this project the challenge of exploring complex virtual phenomena and presenting them in a visual way. “I love you [rev.eng]” (rev.eng = reverse engineering) is the revamped and expanded version of the initial exhibition which was successfully shown in June 2002 in the Museum for Applied Art in Frankfurt and in February 2003 at the “transmediale.03” in Berlin.

Further information on all exhibits, the digital version of the exhibition catalogue and extensive pictorial material can be found on the project’s website www.digitalcraft.org/Iloveyou (+ press section) or direct from:

digitalcraft.org was founded in 2003 as a spin-off of the “digitalcraft” section of the Museum for Applied Art in Frankfurt am Main (2000-2003). Its mission is to research and document fast-moving trends in everyday digital culture and to present them to the public. Since 2003, digitalcraft.org has been an independent cultural organization under the direction of Franziska Nori. Its work includes interdisciplinary exhibition projects such as “adonnaM.mp3” (2003) on the phenomenon of file sharing, “Origami Digital” (2003) on the digital demo scene, public lectures and publications, and consultancies for public institutions and museums. The subjects it explores reflect the rapid development in communications technologies and methods and their significance for modern society.

Brief profile of the Watson Institute for International Studies

Brown University in Rhode Island is one of the most renowned private Universities in the USA. One of its associated institutes is the Watson Institute for International Studies, named after its founder, which is dedicated to interdisciplinary studies. Under the direction of Prof. James Der Derian, the “Information Technology, War and Peace Project” has been started up to make a targeted analysis of the potential impacts of network structures in the globalised society. In September, “InfoTechWarPeace”, a new, one-year research project, is starting up with the heading, “The Power and Pathology of Net-works”. The central matters it will be dealing with involve analysis of the questions: What new forms of global security and governance are needed to manage the potential, allocate the resources, and reduce the risks of networks? How do we assess the dangers of global interconnectivity (networked terrorism, computer viruses, pandemics) against the vaunted benefits (increased transparency, higher productivity, global interdependence)? The research project will be inaugurated with a symposium and the “I love you [rev.eng]” exhibition.

Life Hacks to Live By
Everything You Need To Know About A Naturopathic Doctor
June 24, 2022
4 Backyard Space Design Errors That Most People Make
March 23, 2022
What To Add To Your Diet To Maximize Your Health
February 04, 2021
Ads
Stay Connected
Where to buy medications ? How to cure impotence with pills? You can buy sildenafil australia online easily. For Thai customers look at priligy thailand online. In Singapore find viagra singapore for sale.