Google’s Picasa site can show a map sprinkled with thumbnails of a photo album’s pictures. Readers of this blog will have inferred I’m a fan of geotagging-in fact, I’m trying to label all my photos with the tags that show where the picture was taken, even though the geotagging process is complicated.

I’m betting that much of the value of geotagging lies in the future, for example when I might have a harder time remembering which hike a particular picture came from. But can anything useful be done with those geotagged photos today?

Based on my scrutiny of a handful of sites Google’s Picasa, Yahoo’s Flickr, SmugMug (the only fee required site), and Everytrail–the answer is yes.

But as with other aspects of geotagging, today’s cartographically smart Web sites are likely to appeal chiefly to enthusiasts who have some patience and technical abilities. Just like we’re not at the stage where most cameras can add a location stamp as quickly as they can add a timestamp, we’re not yet at the stage where most folks are going to start with an online map when they want to share their photos or reminisce.

Collectively, the sites I checked show the potential of geotagging–but also the rough spots. My top pick is Flickr, with Picasa and SmugMug tied for second place. But each site has different strengths and weaknesses, so look carefully before you make any commitments.

One of the main reasons I picked Flickr as the top is because the Flickr maps interface can sift data better. For example, you can see a high-level view of all your geotagged photos, and you can filter that view with parameters such as your photos, your friends’ or contacts’ photos, anyone’s photos, and most important in my opinion, specific tags. That’s a handy interface when trying to find photos of, say, Yosemite National Park, but you can’t remember which of several trips a particular photo is associated with. 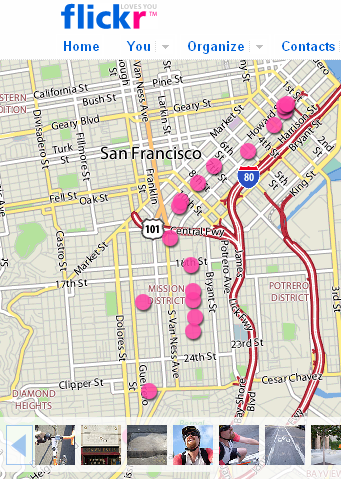 Flickr displays pictures as unevocative pink dots, but the photos themselves are shown on a strip below.

In contrast, Picasa and SmugMug draw maps that only reflect the contents of a particular group of photos–called galleries at SmugMug, albums at Picasa, and sets at Flickr. (Google Maps can show Picasa images of a particular area to Google account holders who install a Maplet application, though.)

Flickr also lets you take a set-based view of a map, with a scattering of pink dots representing your pictures. Indeed, it’s probably the most likely way somebody might want to use a map to show off pictures of a recent trip, for example.

SmugMug, though, has what I found to be the slickest geotagging feature out there: fly-through slideshows of a gallery. With this ability, the site automatically shows a gallery’s sequence of photos, displaying thumbnails along the way on a map and a red line connecting them.

It’s a bit rough around the edges–I’m guessing because the technical difficulties of combining external Google Maps data with its own thumbnails–so it can be herky-jerky at times and with missing map elements. And for slideshows, thumbnails are hardly the best way to showcase sweeping vistas. But there’s no question in my mind that the feature imparts a sense of traveling through a place, a sensation that regular slideshows completely lack.

Where Picasa has the edge over Flickr and SmugMug is in showing thumbnails of each image on the map, not just a dot or pushpin, which I like better even though thumbnails can get pretty crowded. It also shows larger pop-up versions than Flickr does. And for people who are geotagging their photos through the Web site, I think Picasa’s interface is the best.

I also like the way Picasa, on an individual photo’s page, includes a map showing where it was taken. But in part that’s because there’s a big panel of verbiage to the right of the screen on which that kind of real estate is available. A more photo-oriented site might not have that space to spare. 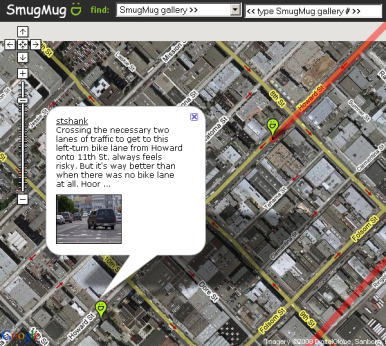 SmugMug lets you tour a gallery of photos on a map–a cool if still rough-around-the-edges feature.

Another significant advantage of Flickr is its handling of location privacy–geoprivacy in Flickr parlance. Naturally, you might not want to share with the world the location of your living room, and your persnickety aunt might be even touchier. Flickr co-founder Stewart Butterfield prohibited geotagging of images of a party at his house.

Happily, Flickr lets you set the geoprivacy of each image, though doing so is awkward. I’m glad that the Organizer allows me to change these settings, but why isn’t there a geoprivacy option in a photo’s privacy settings window or on the map that’s shown when you click the picture?

There are some other options out there that deserve a look. Google’s Panoramio has a reasonable approach to virtual tourism if not necessarily the best interface for storing your photos–it seems like a ripe candidate for some integration with Picasa.

Loc.alalize.us likewise is an entertaining way to browse geotagged photos; it’s a glitzy interface built on top of Flickr photos and Google Maps.

Like Panoramio, Locr, a German company, lets you upload your photos. Like SmugMug, it’s got a slideshow ability, though its pictures are large and its map, a strip on the left edge with pushpin locations, is more an afterthought. That makes for a more beautiful slideshow than SmugMug’s thumbnails, but there’s not too much of a sense of place to it. And I can’t help thinking when I see sites like Locr, though, that it must be tough building a critical mass of members when there are more significant photo-sharing sites already with significant momentum.

For a journey-oriented site, Everytrail lets people upload whole GPS track logs and label them with points of interest and photos. It’s also got a handy feature that can show others’ Panoramio pictures. It’s an excellent way to look at trips people have taken in a particular area. 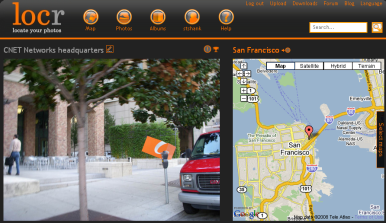 I found Everytrail’s interface a bit difficult and unintuitive at times, but it does have the advantage of being able to piggyback on Flickr: I successfully imported my bike trip Flickr set into an Everytrail map-through the clunkiness of the process was evident by the fact that I have three copies of each photo, and I can’t figure out how to get rid of the duplicates. Also, when I inadvertently uploaded the wrong day’s track log for a batch of photos, I had a hard time figuring out my error.

In the months that I’ve been trying this out, though, geotagging has been improving. I’m confident that these sites will improve as geotagging photos in the first place gets more comfortable, more people try it, and programmers hammer away at the computational and user-interface challenges.

Another area with potential is software to deal with geotagging on computers. Mostly that’s limited today just to utilities to marry geographic data with image files. But the basic geotagging support in Adobe Systems’ Lightroom and Apple’s Mac OS X 10.5, which both can show a photo’s location on a map, is a harbinger of things to come. Better geotagging abilities on people’s computers will fuel improvements on the Web and vice-versaSource: Extra Tech.

Life Hacks to Live By
How Immigrants From Outside Europe Can Move to Malta
November 30, 2021
Why Are N95 Masks so Effective at Protecting Against Pathogens?
April 08, 2021
5 Amazing Benefits of Using Insulated Cooler Bags
September 10, 2020
Ads
Stay Connected
Where to buy medications ? How to cure impotence with pills? You can buy ivermectin australia online easily. For UK customers look at priligy thailand online. In Singapore best place is viagra singapore for sale.