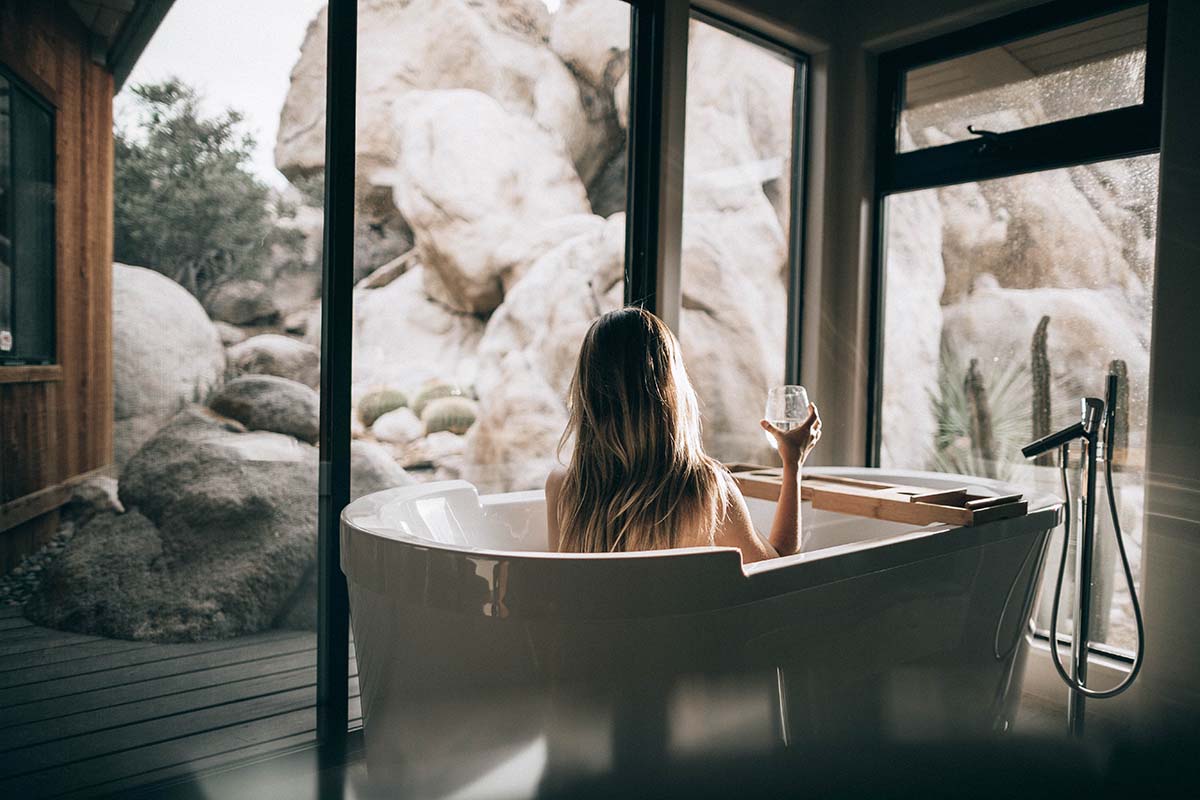 It says a lot about baths that even though modern self-contained shower cabins have taken showering to a whole new level and made it into an absolute pleasure instead of just a fact of life, given a choice, we suspect most people would still opt to have a bath in their bathroom as well.  These days, having a bath is luxurious and highly-valued “me time” and an effective way to relieve stress in a hectic world.

If you have space for a bath in your home, you should count yourself lucky and make the most of the opportunity.  With this in mind, here is a run-through of the kinds of baths we stock at Poshh, along with some ideas about how they could fit into your overall bathroom design and how to style them to create the bathroom of your dreams.

These are the de facto standard in baths, and the good news is that they will fit into all but the smallest of bathrooms and almost all forms of decoration. If you’re the kind of person who likes to ring in the changes regularly, then the simple and inconspicuous nature of the straight bath could be the perfect blank canvas for you.

Because straight baths are so famous, there is a vast range of accessories for them, in fact, you’ll find quite a few here at Poshh.  You can bling up your straight bath with eye-catching taps or opt for a more natural look by switching to wooden bath panels.  The only limit is your budget and your imagination. 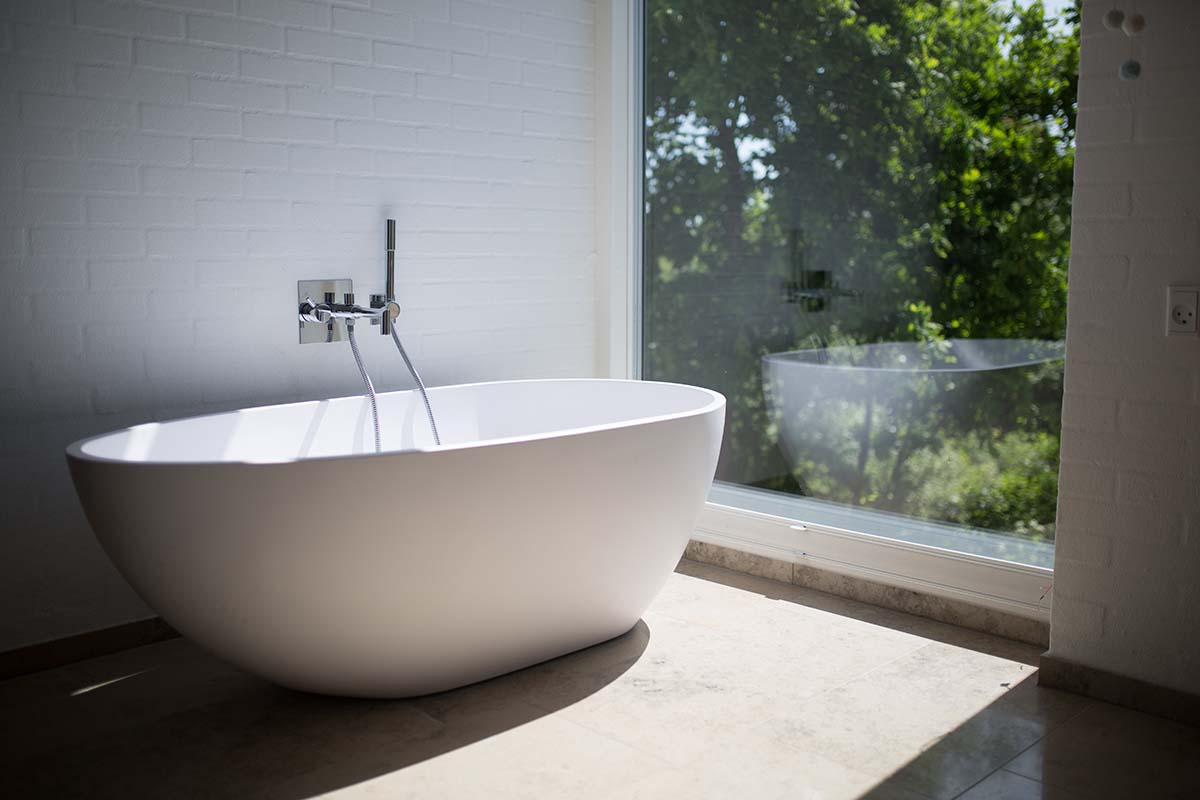 A quick look at Pinterest, Instagram, or upper-end design magazines will show you just how utterly, jaw-droppingly stunning freestanding baths can be. If you’re buying a freestanding bath, it’s almost certainly going to be the focal point of the entire bathroom, and you’re probably pleased with that.

Although freestanding baths still tend to be more associated with traditional interiors, their popularity means an ever-increasing number of contemporary or period-neutral freestanding baths, which may be a better choice if you want to maximize flexibility in your design choices.

P-shaped baths took a while to become appreciated. Still, they’re now steadily gaining ground as they are ideal for many modern bathrooms, where people would really love to have both a bath and a shower but can’t quite find enough space for two separate units.

The fact that P-shaped baths were designed to address a current issue means that they aren’t an ideal choice if you want to create a period bathroom, but if you’re happy to stick within a range of more contemporary styles, then P-shaped baths will fit right in.

When designing a bathroom including a P-shaped bath, you often want to think about “balancing” the width at one end of the tub compared to the other.  One easy way to do this would be to place a seat or storage unit at the other end to create symmetry.

This still leaves plenty of room to get in and out.  It has to be said that P-shaped baths don’t have quite the same range of alternative bath panels as standard baths do, but there is still a decent range from which to choose, and you can find a selection here at Poshh. They take the same taps and waste fittings as standard baths so you’ll have plenty of options there. 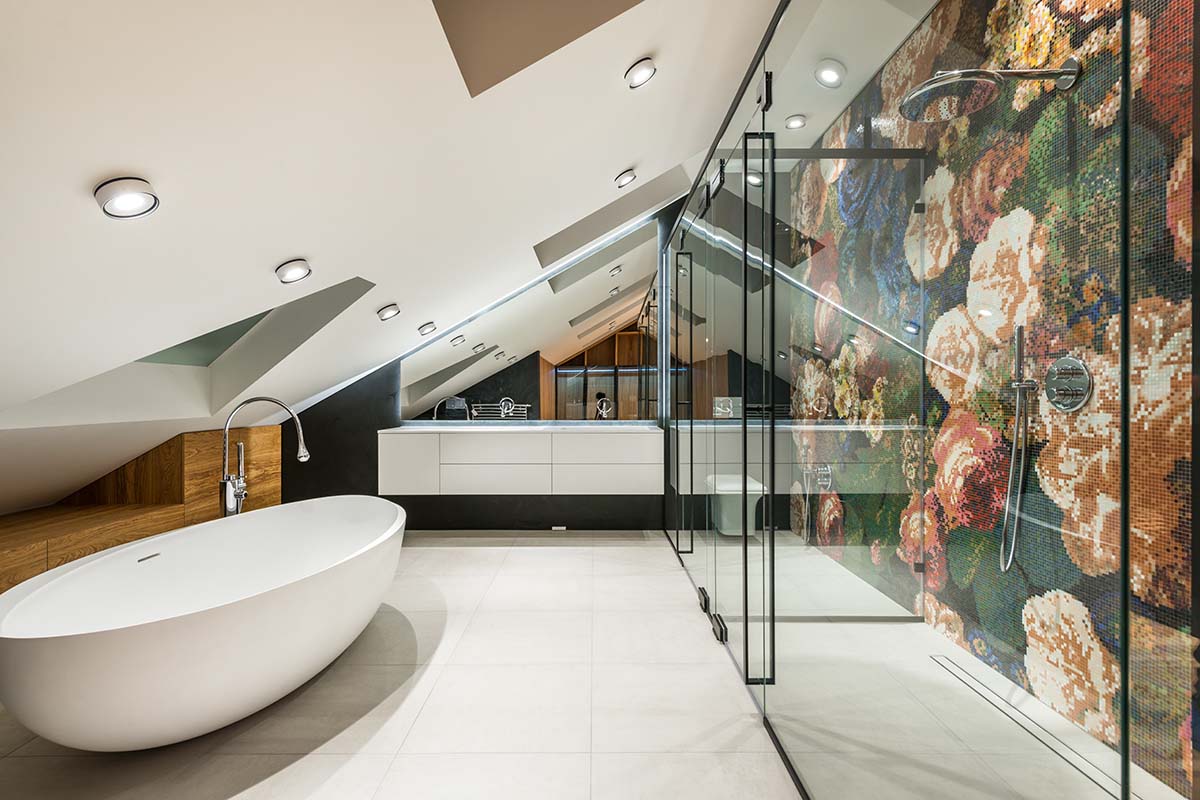 Whirlpool and spa baths come in all shapes and sizes, but the one common factor that unites them is that they all have a reasonably modern appearance, so again not ideal for period bathrooms.

We’d say that whirlpool and spa baths are perfect for creating spa-like bathrooms, but they will fit in with pretty much any style other than traditional.

You are unlikely to have the same range of accessories to choose as you do with standard baths but to be honest. We suspect most people’s eyes will light up just at the sight of whirlpool and spa baths, so we’d suggest treating them similarly to freestanding baths because they become the star attraction in your bathroom, and you just work with that.

Double-ended baths are essentially standard baths but with the taps in the middle rather than at one end, hence from a design perspective, they can be thought of in much the same terms. 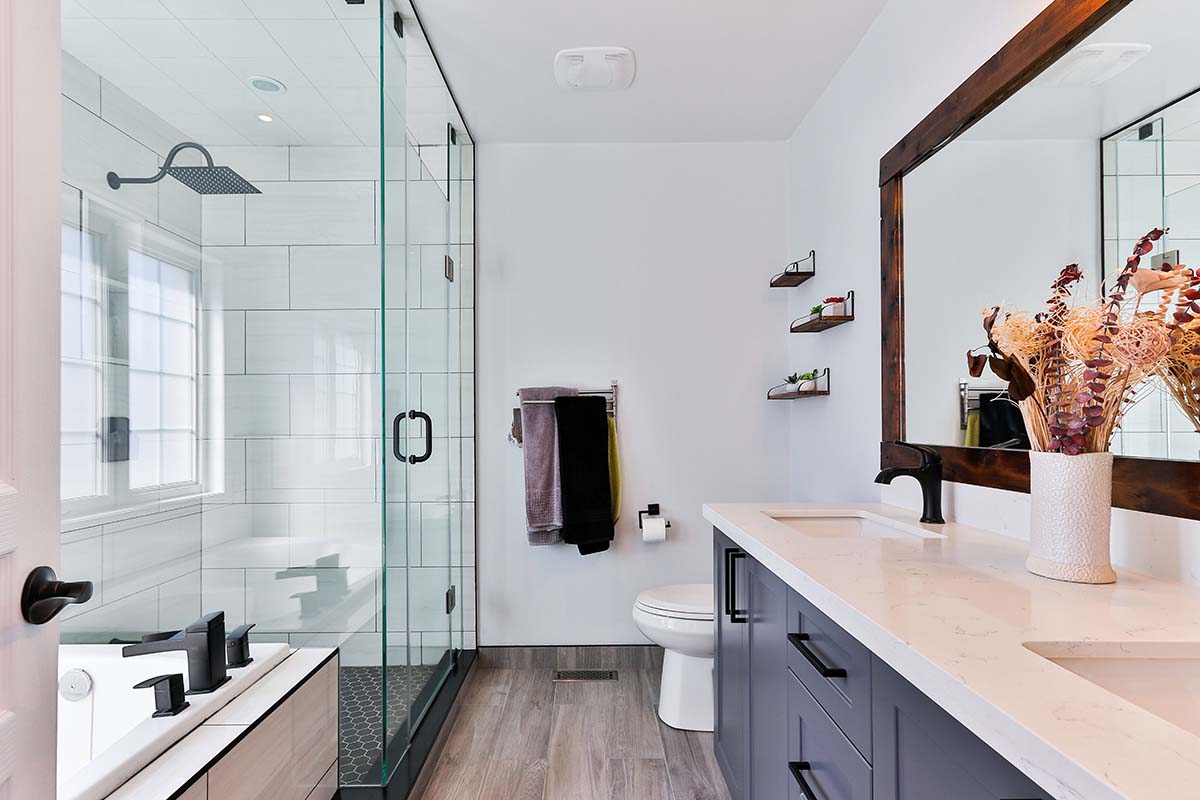 Corner baths are the baths for when you really don’t have space for a bath but still want one and are often coupled with overhead showers to maximize the use of space.

The location of a corner bath is generally non-negotiable; they typically go in the smallest bathrooms with only one realistic place for each appliance, so the only remaining question is how to style it.

Given the above facts, styling corner baths are generally about making the most of the vertical space visually and practically.  If you’re using a corner bath with an overhead shower, you’ll need a shower curtain, so look for one with vertical stripes or a pattern to draw the eye upwards.  If you don’t have a shower, you’ll probably still have tiling that you can use similarly.

If you’re on a budget and/or renting, you can use tile decals to add style to a budget.  Use the vertical space for your bathing/showering necessities too.  Make them a feature.  If they come in stylish packaging, show them off as they are; if not, decant them into smart bottles you’re proud to display.

Back-to-wall baths are double-ended baths with only one long side against the wall, with both short sides being in clear floor space, giving the impression of an almost freestanding bath.

Back-to-wall baths have several practical advantages over genuinely freestanding baths. In design terms, they have the primary benefit of using pretty much any accessories created for standard baths.

This gives you a huge range of options.  Just remember that even though back-to-wall baths have substantially less potential to overflow than truly freestanding baths, they are still a bit more liable to overspill than standard baths, mainly when being used by (little) people who love to splash, so think carefully about where you’re going to put anything which needs to stay dry, whether that’s bath robes, towels or toilet paper. 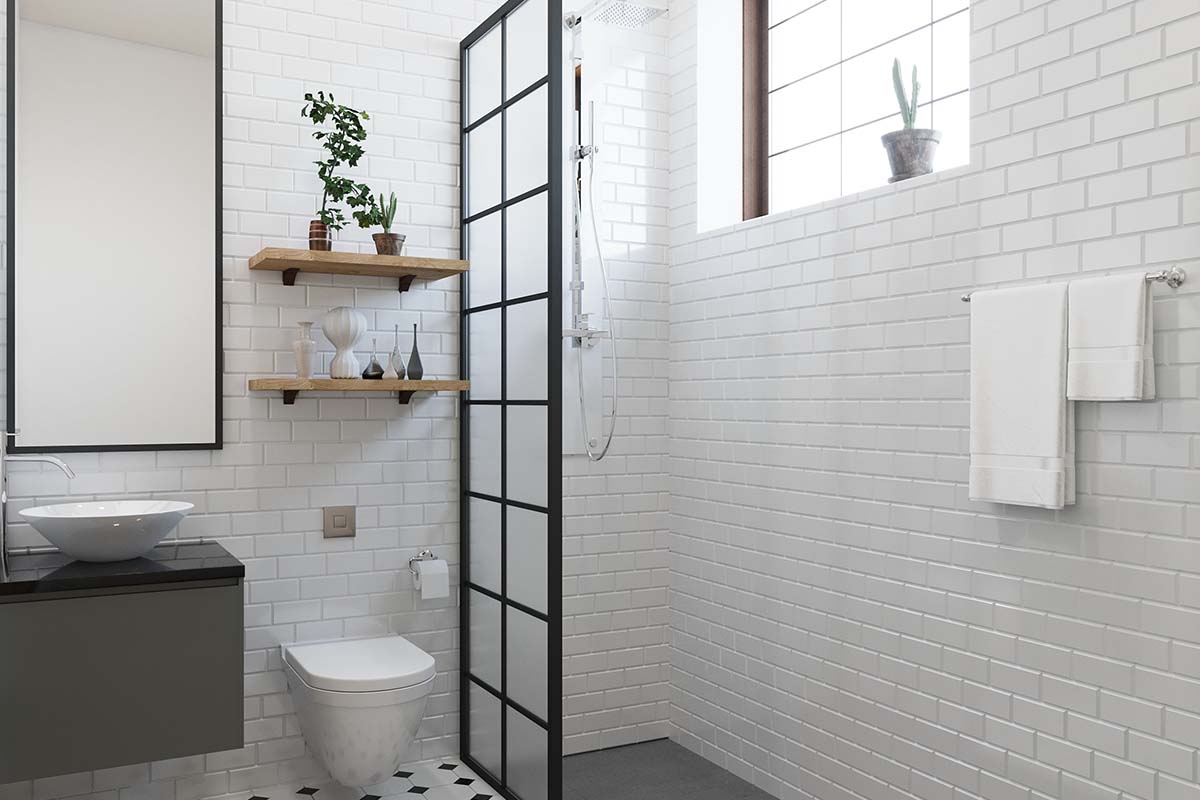 The popularity of easy-access walk-in baths has really been on the rise over recent years, and even though you can’t yet buy the same range of accessories for them as you can for other types of baths, you do have plenty of options for styling them to create your perfect bathroom.

As well as fitting right in with all modern interior design trends, designers can also play with the fact that modern easy-access walk in baths closely resemble traditional Japanese soaking tubs, which means that they can be used to create bathrooms with an oriental influence, including spa-style bathrooms, many of which are influenced by the East and its concept of Zen.

Life Hacks to Live By
5 Subtle Warnings That You Are Dehydrated
September 03, 2021
What the 1918 Spanish Flu Pandemic Can Teach Us About Corona...
April 02, 2020
The Importance of a Healthy Blood Pressure
January 05, 2018
Ads
Stay Connected
Where to buy medications ? How to cure impotence with pills? You can buy sildenafil australia online easily. For Thai customers look at priligy thailand online. In Singapore find viagra singapore for sale.