Barry Michaels-Radio is My Life! 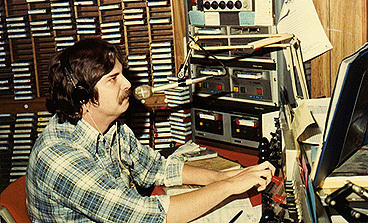 Thirty-year broadcast veteran Barry Michaels (‘Michaels In The Morning’) has quite a few stories to tell! His early life was an idyllic one, growing up on picturesque farmland in the southeastern United States, with a Mom and Dad to admire and a support group of aunts and uncles that many don`t have today.
Barry became interested in radio at an early age, becoming a gopher for one local radio personality and quickly learning where the emphasis is placed in the term show business?. Barry’s career began in earnest after college, when he finally screwed up his courage to apply at a small radio station near his hometown, where he spoke mostly to cows. Little did management know that he would have paid them to be on the air! From having the honor of being recognized by his peers with nominations as Major Market Air Personality of the Year to working as a towel boy at a swanky country club between radio jobs, you`ll share in Barry’s top of the mountain triumphs and bottom of the valley lows.
You’ll get to meet some of the most talented professionals in the business, and you’ll cheer the heroes and clench your teeth at the bad guys! Barry also honors those who entertained and inspired an entire generation of radio personalities-the voices on those fifty thousand watt a.m. radio stations with legendary call letters like WLS, WCFL, WABC and more.

From sleeping in his Volkswagen ‘Bug’ to traveling across the United States five times in search of the perfect on-air radio job, Barry’s stories are poignant and laugh out loud funny. Learn how Barry was almost gunned down by a psychotic listener at a radio station in Orlando, Florida before his boss intervened. See television through his eyes when he begins work at a rock and roll station that employs a Catholic priest as a ‘DJ`, and dodges flying beer bottles in one of the many bars he makes appearances in for his radio station.

The ‘Radio Road’ is fraught with many bumps along the way and you may even see yourself as Barry attempts to raise three young sons as a single father and tries a comeback after a bitter divorce and child custody battle. May you not want to enter the thirty-five dollar a week almost condemned house Barry was living in a while awaiting the courts ruling. You don`t want to wake up in his room during a thunderstorm as rats prepare to feast on his toes! Meet his new landlord, who`s down on his luck too, and has a secretive past with the United States Army.

From personal and professional disasters to top of the mountain Triumphs, Barry’s adventures have taken him from the beautiful stillness of his blue Virginia mountains to the golden Pacific ocean–all seen through the window of his beloved Volkswagen Beetle, which he still owns. It’s radio, it`s life, and it’s real. Come along for the ride, and find out the real stories of those ‘masked riders of the Hertzian wave.  With audio and photo collection.

Permission is granted to reprint for free with resource box and byline intact.

0 thoughts on “Barry Michaels-Radio is My Life!”

Life Hacks to Live By
Why You Should Invest In Kratom
May 25, 2021
Adding Some Luxury To Your Garden With A Hot Tub
June 20, 2020
Max Polyakov - the Expert With a Huge Background in Dog Trai...
September 21, 2018
Ads
Stay Connected
Where to buy medications ? How to cure impotence with pills? You can buy sildenafil australia online easily. For Thai customers look at priligy thailand online. In Singapore find viagra singapore for sale.