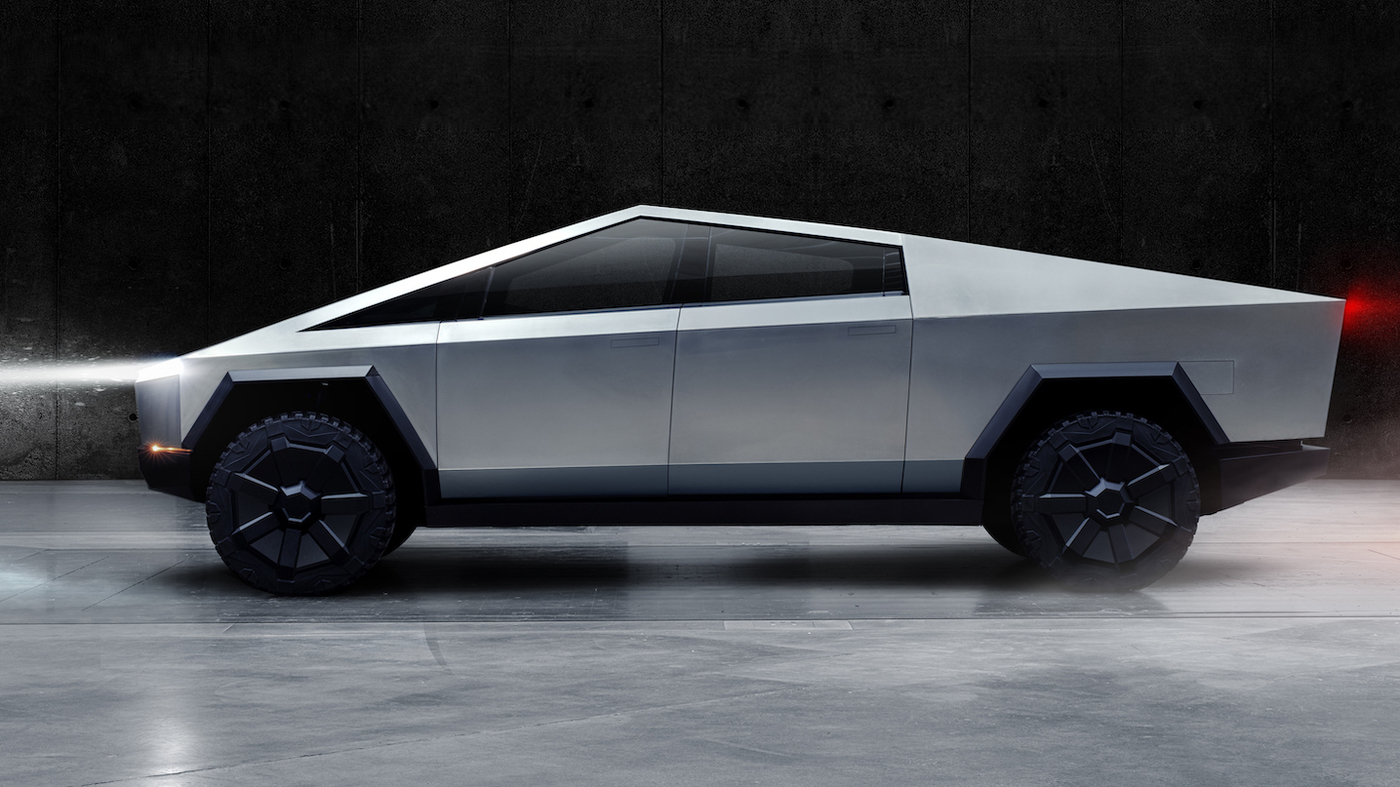 The long-awaited Tesla’s Cybertruck has arrived looking just as much as a pickup truck we all know. Tesla CEO Elon Musk unveils the electric pickup truck at its Design Studio in Hawthorne, California, citing its toughness as well versatility.

Although its shape was that of a truck, Cybertruck really didn’t look appear like so, but rather like a huge metal trapezoid on wheels, the artwork puzzled his fans a great deal. The design stretched from the front bumper to the top of the windshield.

But something awful happened—as Musk was displaying hi trick to fans, the “armor glass,” smashed. A metal ball was dropped onto a sheet of “regular car glass,” cracking it.

The unveiling was timed, and fans and journalists filled the auditorium unveiling. With speakers breathing some music, the truck could drive onto the stage through wafts of artificial smoke, at the edge, pyrotechnic flames rose as the vehicle stopped in front of a graffiti-style Cybertruck graphic.

Nobody *expects* the Cybertruck pic.twitter.com/khhYNFaVKs

Musk hints that he had a collection of cues before the event and cites t have been influenced by Bladerunner and James Bond movie The Spy Who Loved Me.

These movies feature sharply angled vehicles, a car design regarded as futuristic and aerodynamic since, since the creation of knifelike Carabo concept car in 1968 by the one Alfa Romeo.

Others who came later with their own makes include Lamborghini’s angular Countach and the Lotus Esprit, whose one was turned into an amphibious vehicle for Roger Moore’s James Bond, which was bought by Musk, in 2013.

The front of the Cybertruck angles up to a point just above the front-seat headrests, where it meets an even longer slope down to the rear — a continuous plane that includes both a transparent roof panel and the truck’s rolltop bed cover, which retracts behind the back seats.

Musk made several claims concerning the truck’s capabilities, including high towing capability and better performance than Porsche 911. It can also tow 14000 pounds, carry 3500 pounds and move to 60 in 2.9

Additionally, the truck will have lockable storage spaces and a sliding cover for the bed.  It has an adjustable ride height.

The Cybertruck is noticeably different from the Simone Giertz concept, which won hacked off the back roof of a new Tesla Model 3 and converted the sedan into a truck, wining fans earlier this year.

He also said Tesla would make the exterior of Tesla’s Cybertruck from a stainless steel alloy developed by his companies. 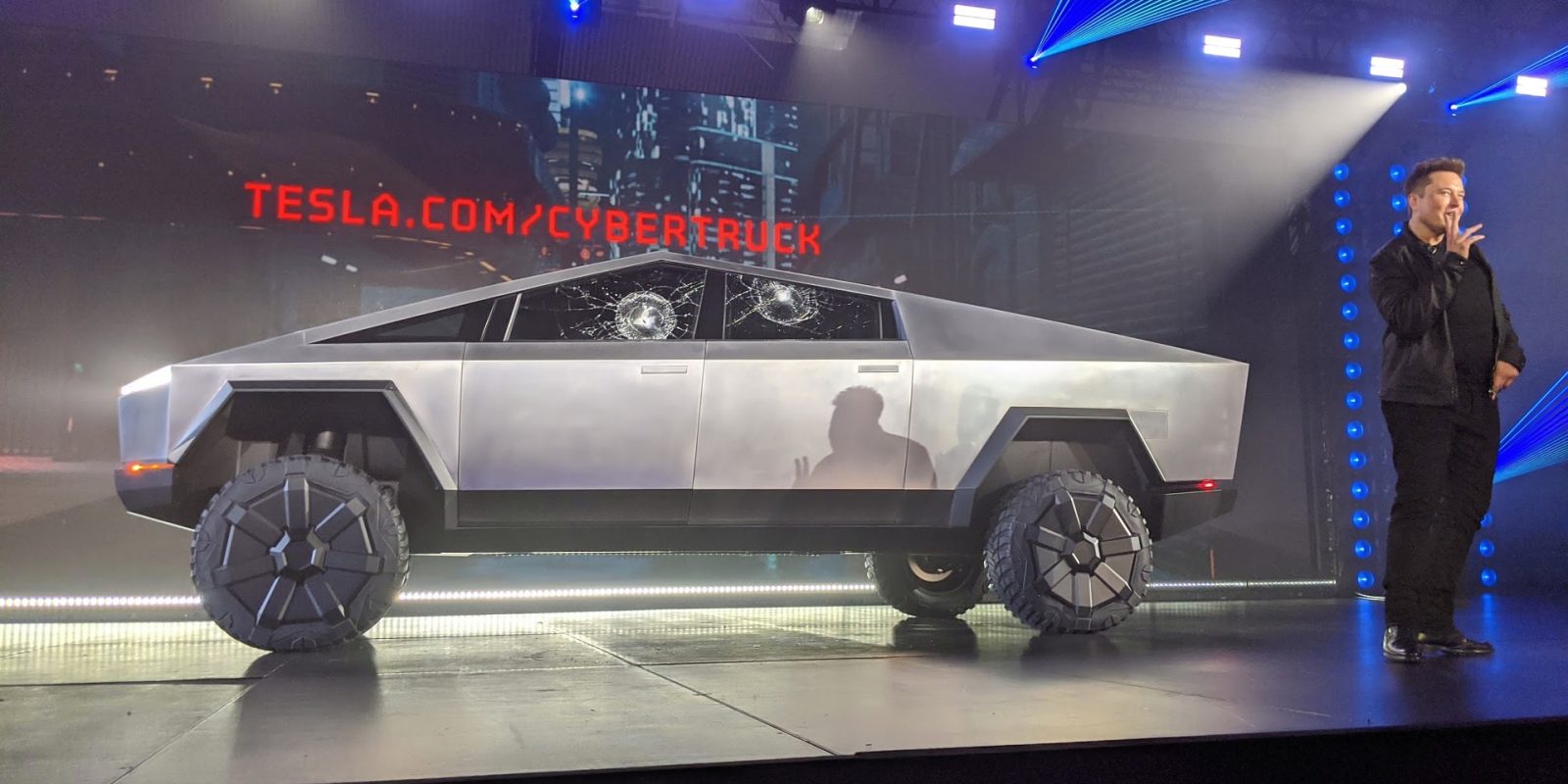 Critics named it a doorstop or a very ugly DeLorean.  But the truck its defenders as well, who seem to attack the negative comments to the Cybertruck’s bold look.

Several people on twitter attacked the critics, terming them as unsatisfied with previous designs in the industry.  Roadshow Editor-in-Chief Tim said, “Many of these same colleagues spent this entire week lamenting an industry that is churning out same, half-assed crossover SUVs. I’ll take weird over anonymous.”

“The F35 of pickup trucks. Don’t think my mind has ever been blown like this before.” Said David Wu on Twitter.

“You want a truck that’s really tough? Not fake tough?” Musk asked the crowd Thursday night. He also said Tesla would make the exterior of Tesla’s Cybertruck from a stainless steel alloy developed by his companies.

Then things went off track with the “Tesla armor glass” strength test. A metal ball was dropped onto a sheet of what Musk described as “regular car glass,” leaving a long crack.

Long-awaited, the metal ball was taken up to a height of around 10 feet and dropped again.

“You sure?” von Holzhausen asked.

Then von Holzhausen spun the ball at the truck, cracking the dented glass of tesla’s cyber truck.  “Maybe that was a little too hard. That’s the plus side.” Musk said.

The Tesla’s Cybertruck hosts six seats and a cargo bed and its 231.7 inches long, and around 80 inches wide and 75 inches tall. Tesla lists its maximum range at more than 500 miles.

For a preorder, you need to deposit $100 to reserve a vehicle that is cited as being ready to hit the road in two years’ time.

Production begins in late 2021, first with Tri-Motor AWD version of the Cybertruck, according to Tesla.

There is perhaps uncertainty in regards to the new design, and probably this could have occasioned a price fall by 6% by Friday midday.

Life Hacks to Live By
Learn How To Live Your Best Life By Looking To The Animal Ki...
May 04, 2022
Can You Get Medical Marijuana for Chronic Pain in Baton Rouge?
December 29, 2021
Maintaining Safety As Lockdown Restrictions Ease Up
June 01, 2020
Ads
Stay Connected
Where to buy medications ? How to cure impotence with pills? You can buy sildenafil australia online easily. For Thai customers look at priligy thailand online. In Singapore find viagra singapore for sale.