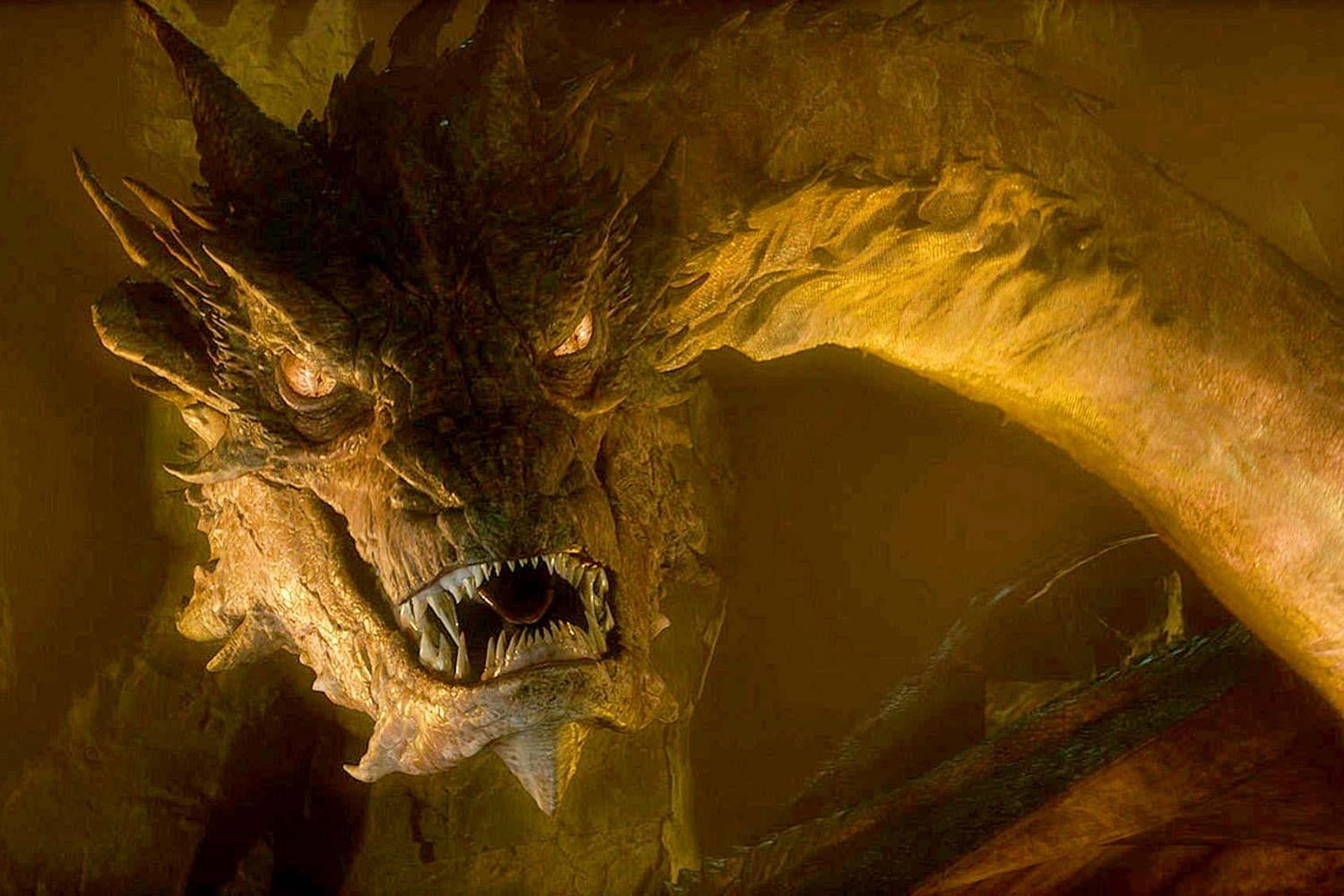 You might have looked around at yourself and noticed that dragons are everywhere in this day and age. They menacingly reside in all corners of our modern mediums and culture. From Movies to T.V shows, Video Games, Books, practically everywhere you look, you will find a dragon lurking nearby.

You might be forgiven for thinking that this is a reasonably new phenomenon, but alas, dragons have always been a prevalent part of our culture and our psyche. Throughout history, dragons have represented many different things to many other peoples, from our darkest fears to our greatest hopes and everything in between.

The following is a list of five dragon paintings that beautifully embody the complex symbology of these fabulous fictional creatures and highlight how they have always been alongside us, throughout the history and evolution of the human race.

Saint George and The Dragon by Gustave Moreau

First, let’s start by looking at the classical ‘Western’ conception of the dragon in this profound work by French artist Gustave Moreau. The myth, retold many times over the centuries, tells of how Saint George tamed and slew a dragon who extorted tribute from villagers and demanded human sacrifice.

In the west, the dragon, on a grand scale, is the symbol for the universe itself and its chaotic, ever-changing, and sometimes devastating nature. On a smaller scale, and perhaps more exclusive to western cultures, the dragon represents the chaos within man that must first be ‘slain’ to overcome and tame the ‘universal dragon.’

Gustave’s depiction of Saint George bravely defeating the gruesome (yet small) dragon to reach his fair maiden above is a symbol for overcoming yourself and your surroundings to obtain your most significant treasure.

Next, let’s take a look at a piece representing the ‘Eastern’ viewpoint and philosophy of the Dragon mythos in this vibrant painting by Japanese artist Utagawa Kuniyoshi. In Asia, the dragon has been part of the culture for over 4,000 years and is perhaps the oldest and most used of any region in the world.

Just like in the west, the dragon represents the ‘power’ of the universe inflow. More interestingly, though, the dragon of the East is a positive symbol of power, strength, authority, and good luck. Many leaders have used it throughout the ages, and it was even assumed that emperors were direct descendants of dragons.

In Kuniyoshi’s painting, these positive and negative ideas are on the whole show. The dragon hovers over the turbulent waves below as if rising from them to overpower and bring them under its command. It stands vividly above the chaotic waters of nature and the dark skies of the universe.

The Dragon Ascending the Heavens by Ogata Gekko 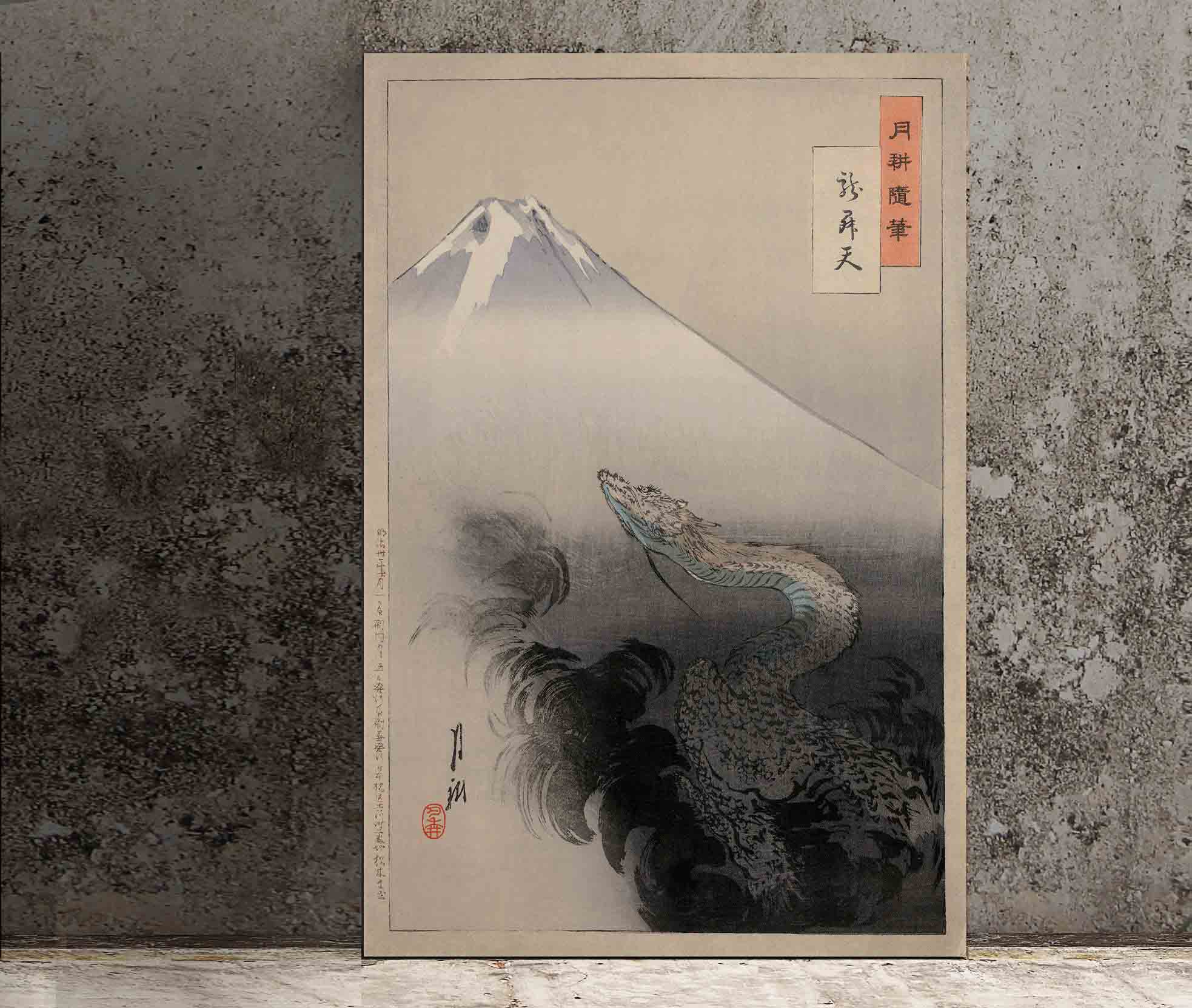 We are staying in the East to look at our next piece, a Zen painting by another Japanese artist, Ogata Gekko. Zen Buddhism is a religion and practice that aims to enlighten and teach its students using the most straightforward methods possible.

This dragon painting illustrates this simplicity perfectly. The dark dragon of chaos ascends to engulf the white mountain in darkness. This is another theme associated with the dragon, the idea of darkness and light in battle against one another, similar to the concept of the yin and yang.

Furthermore, through this simple art style of black in contrast to white, it becomes a lot easier to see and understand the underlying concepts of what the dragon is meant to represent. Zen art is simple yet stylish and plainly states that; the truth is never complicated. 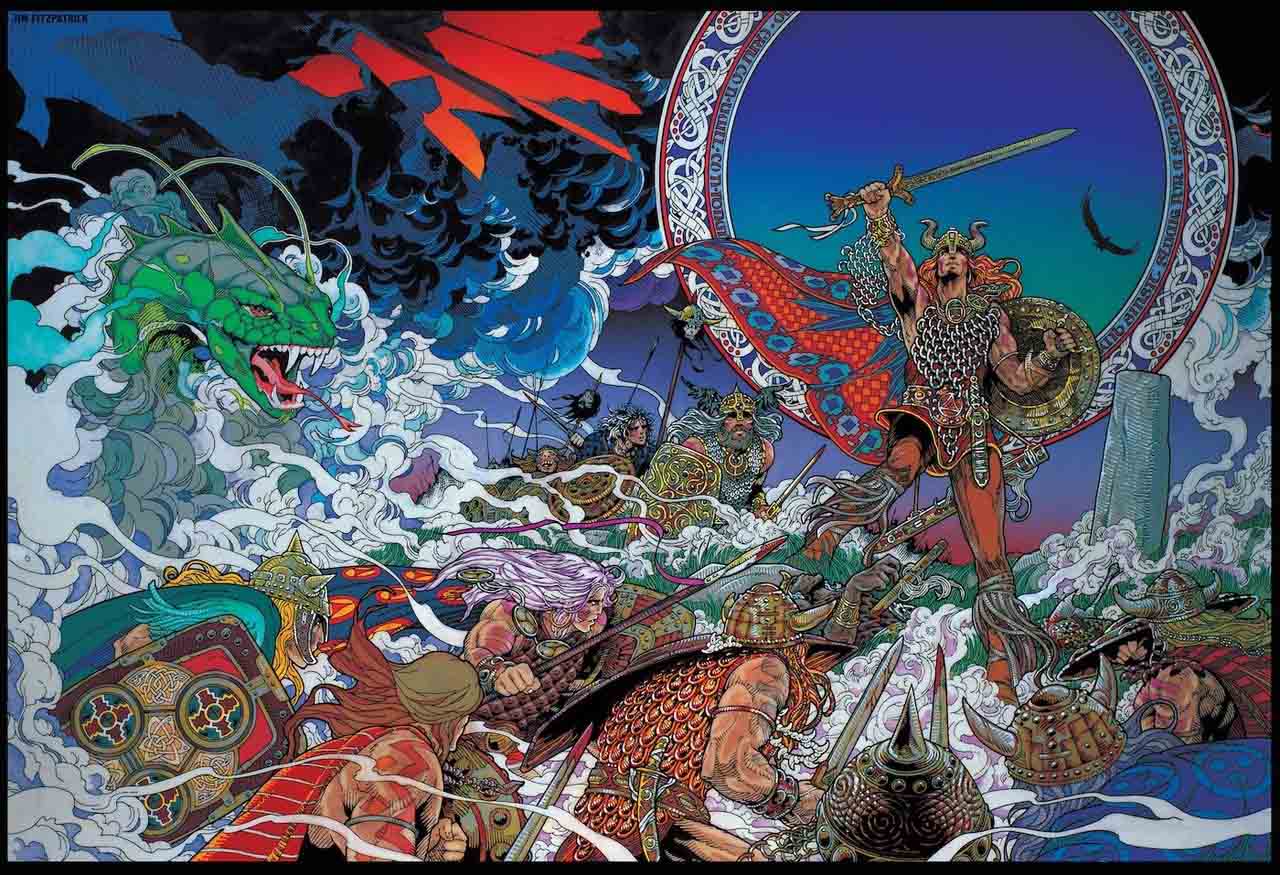 Jim Fitzpatrick is a renowned Irish artist most famous for his iconic two-tone portrait of the Mexican revolutionary, Che Guevara. Mr. Fitzpatrick is more widely loved though for his exquisite works on Celtic mythology and society and is definitely worth a look for any art fan.

The painting above, titled ‘Nuada the High King’ was initially used as the cover for Jim’s book called The Book of Conquests, which depicted a retelling of the cycle of myths of the Celts first coming to Ireland.

The standard ‘dragon’ theme of man’s conquest over himself and nature is brilliantly illuminated in this beautiful piece. From Nuada’s triumphant stance over the shrunken foes beneath him to the dragon in the background, they are seemingly being kept at bay by the sheer power of the warrior’s will.

The Desolation of Smaug by The Hobbit

Lastly, let’s take a look at a dragon from our own modern culture; the terrifying Smaug from J.R.R Tolkien’s The Hobbit. Tolkien’s dragon embodies the most frightening aspects of the beast, from its giant size to its ability to breathe fire.

Smaug is a sinister creature who seemingly delights in creating destruction, greed, and lust for gold. This again is meant to highlight the destructive nature of our inner being and our greed and desires.

In the end, the dragon is defeated, and the people’s fortune is reclaimed. Deep down, this is what the dragon myth is all about; defeat your demons to claim your gold.

So, there you have it, five incredible paintings of the mythological monster known as “the dragon.” Now you can impress all your friends with your deep knowledge and newfound understanding of the many meanings behind this powerful historical and cultural symbol. And also appreciate more mythical paintings at the 1st Art Gallery.

Life Hacks to Live By
How to Overcome Pain When The Doctor Is Out
August 04, 2020
CBD Catalog: 7 Key Things to Look for When Buying CBD Oil
March 13, 2020
4 Ways For Men To Start Taking Better Care Of Themselves
March 27, 2018
Ads
Stay Connected
Where to buy medications ? How to cure impotence with pills? You can buy ivermectin australia online easily. For UK customers look at priligy thailand online. In Singapore best place is viagra singapore for sale.