Bethesda was expected to make some important announcements at E3 this year, and they certainly didn’t disappoint – unless you were hoping for the rumored announcement of a VR Elder Scrolls game.

It was anticipated that Bethesda would debut two VR games at E3 2017 and that one would be Fallout 4 VR.

Fans of the wasteland will indeed get to experience the Fallout world through the HTC Vive, and the trailer makes it look like the game will essentially be a full version of the existing Fallout 4 with adaptations made to make mechanics like the settlement building workshop work well in VR.

A VR version of Fallout 4 has been a fairly badly kept secret, with a lot of sites reporting that the game would be one of Bethesda`s biggest announcements of the year.

For fans of Fallout, this could well be the game that encourages them to get on board with VR gaming, as the famous post-apocalyptic world the Fallout franchise is set in is one that certainly lends itself to VR exploration, and the first person, single player RPG is conceptually one of the easiest types of games to adapt for VR play without making too many changes to how the game works.

Of course, as beloved as Fallout 4 is, the game has been out for long enough now that many players feel like they have already done everything they wanted to do in it, so while the VR experience may be tempting, it doesn`t necessarily offer much by way of new content.

Creation Club for Fallout 4 and Skyrim

To give Fallout 4 players something new to get excited about, whether they want to play in VR or not, Bethesda also announced a new product called the Creation Club, which allows new custom content to be created for Fallout 4, and Skyrim Special edition. With extra skills and the ability to create new adventures, this will be fun for people who like the idea of modding but want to play things that are officially curated by Bethesda and so won`t have any compatibility issues with any updates or add-ons to the games.

While some people thought the second VR announcement from Bethesda at E3 was going to be an official VR version of Skyrim (some have already experimented with making unofficial Skyrim mods to make the game playable through VR hardware), the announcement was actually a brand new Doom game in VR.

Unlike Fallout 4 VR, this doesn`t look to be a new version of the existing Doom game from 2016 in a VR environment, but a different game using the familiar Doom world and monsters.

Rather than actually being placed in the Doom setting `in the flesh`, you get to inhabit different machines that explore and fight through a kind of AI matrix.

It certainly looks good and sounds like an exciting prospect for those who want to feel even more immersed in the gore-filled action than in Bethesda`s existing Doom game.

So Why No Skyrim VR? 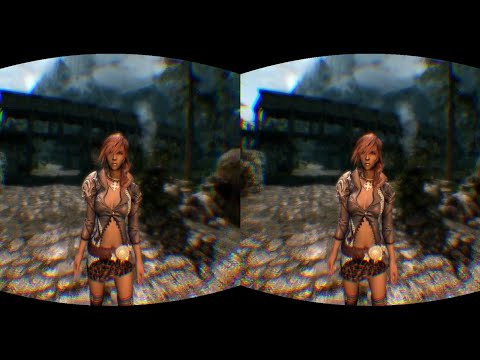 The major announcement concerning Skyrim from Bethesda was not, then, a VR version of the game, but that Skyrim would be coming to the Nintendo Switch console.

This is great news for those who want to play Skyrim in a new way, and also for the Switch market, but perhaps was a letdown for those hoping to finally get a glimpse of a VR Elder Scrolls experience.

The current thinking among watchers of Bethesda is that the VR version of Skyrim is, in fact, in the pipeline, but that they weren`t yet confident enough in how far along they were with it to debut it at E3.

When you consider that Skyrim is much older than Fallout 4 and was made on the previous game engine (the same one used for Fallout 3 and Fallout New Vegas), it is possible that there is more complexity involved in converting the game to VR than with Fallout 4.

Nonetheless, Skyrim is one of the most iconic games in existence and has retained its huge popularity even against much newer open world fantasy games like the Witcher 3 (check out this interesting comparison of Skyrim vs Witcher). Just like the Fallout world, a lot of people have been waiting for VR just to explore the rich setting offered by Skyrim, and so it is undoubtedly disappointing to have to wait longer for news of a potential release.

Other News from Bethesda at E3

Aside from releasing Skyrim for the Switch, Fallout 4 for VR, the new Doom game, and the Creation Club add-ons, Bethesda had one more big announcement – a new Wolfenstein game.

Bethesda got hold of the Wolfenstein franchise in 2015 and remade the original id Software game, but haven`t done much with the title since.

Now, fans get a chance to see what the sequel they have been waiting for will look like, as well as a release date in October this year. Wolfenstein II – The New Colossus will be available for PC, PS4, and Xbox One.

Other than that, Bethesda`s other announcements included a new Dishonored game, some add-ons for the Skyrim card game, and some new dungeons for Elder Scrolls Online.

All of this shows that Bethesda is still putting a lot of their eggs in the Elder Scrolls basket, with the various add-ons and the online game being given updates, and so hopefully it won`t be long before Skyrim finally comes to VR.

Of course, what some people may actually prefer is if they actually made a new installment of Elder Scrolls or a Fallout 5, perhaps VR ready from the outset.

However, it looks as though they still want us to get a bit more mileage from the classics before we are treated to a completely new game!

Which of Bethesda`s E3 announcements are you most excited about? Let us know in the comments!

Life Hacks to Live By
5 Co-Parenting Tips for Divorced Parents
May 01, 2020
How Bed Bug Infestation Can Impact Home and You
September 12, 2017
Wedding Cakes
September 02, 2007
Ads
Stay Connected
Where to buy medications ? How to cure impotence with pills? You can buy sildenafil australia online easily. For Thai customers look at priligy thailand online. In Singapore find viagra singapore for sale.