What Painting Made Henri Rousseau Famous? 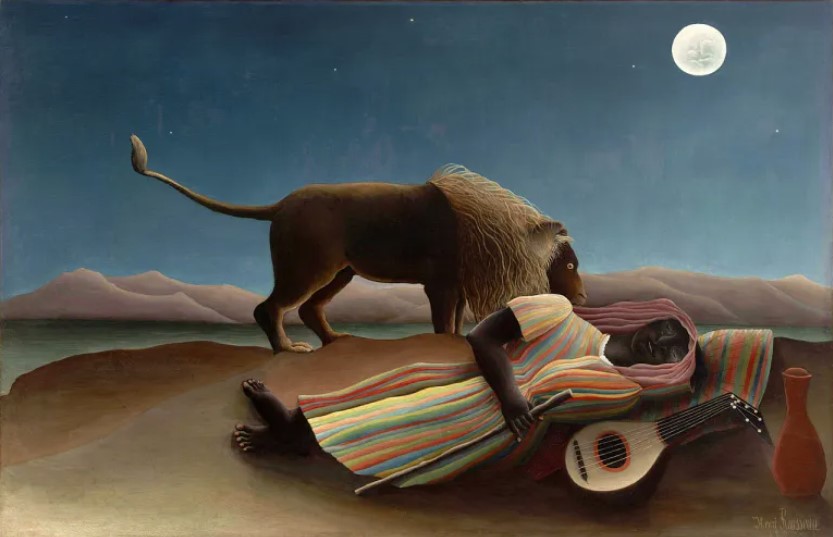 What Painting Made Henri Rousseau Famous?

Born in 1844, starting his career in art at 40, and receiving the most recognition in the late 1900s, Henri Rousseau’s journey was not the smoothest. Critics almost frequently ridiculed his work, and he only got his deserved accolades during the final five years of his life.

No one can particularly single out a painting that proved to be his turning point among his peers. We can tell you all about Henri Rousseau’s art as we present the sequence of artworks that led to his eventual recognition and celebration by Picasso himself in Le Banquet Rousseau. So let’s get into it. 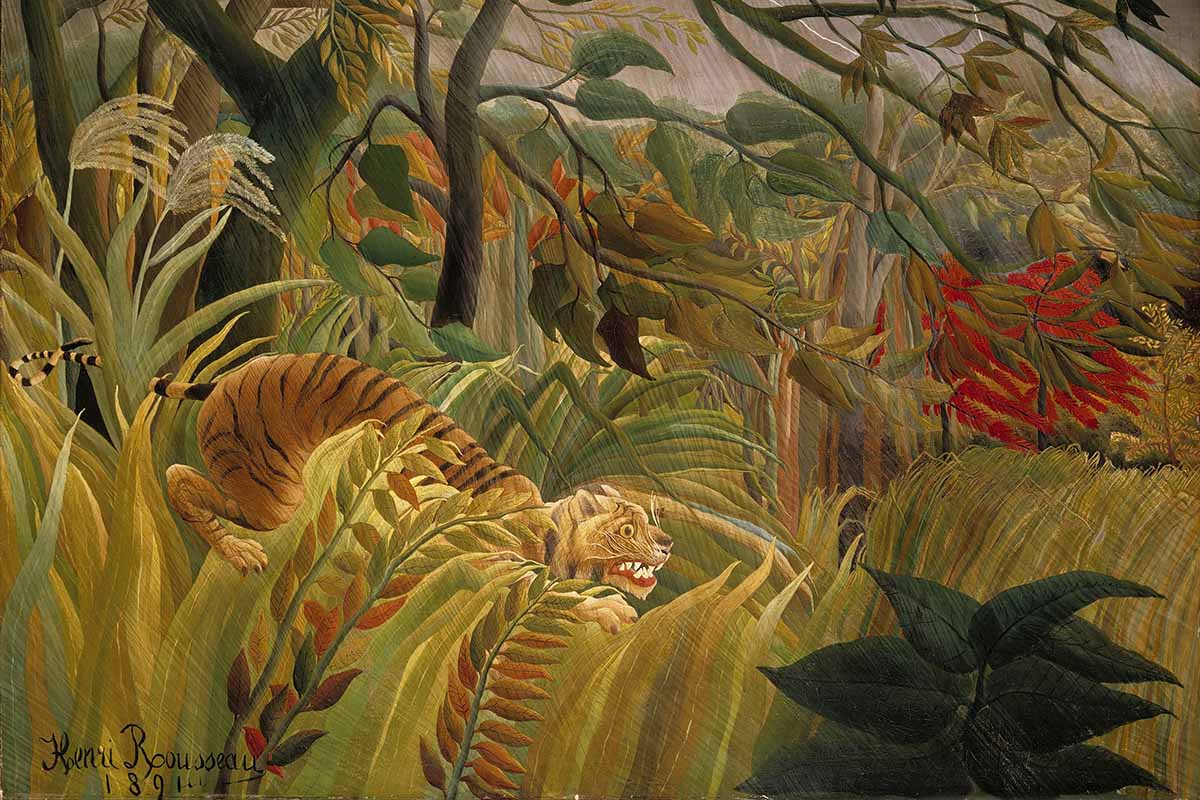 Tiger in a Tropical Storm is Rousseau’s first painting that drew recognition from other artists, particularly Felix Valloton. Displayed in the Salon des Indépendants, the painting features a tiger stalking its prey but, paradoxically looking, surprised.

Ironically, it was the first on the list of Henri Rousseau jungle paintings that were met with a negative reception from critics, making him take a 10-year break from his characteristic jungle artworks. Nonetheless, Tiger is a Tropical Storm was still a painting that some critics gave accolades.

As exaggerated as it may seem, Felix Vallotton calls it “…the alpha and omega of painting”, given the idea behind the tiger’s disposure. So we could say more eyes were on his artwork after this, and his next popular work could be his most famous today.

Displayed at the 13th edition of the Salon des Indépendants, The Sleeping Gypsy is one of the most revered works of Henri Rousseau in our modern time, even if it wasn’t during its time. It features a tired black wanderer in a coat of many colors sleeping beside her mandolin and water jar, with a lion up close to her but not devouring her, and a bright moon illuminating the scene.

Henri offered the work to the Mayor of Laval, his small hometown in Western France, but it ended up with a charcoal merchant instead. It wasn’t until 1924 when Louis Vauxcelles, an art critic found it, after which it went through a series of sales before Alfred H. Barr Jr. eventually purchased it.

Currently sitting at the New York Museum of Modern Art, The Sleeping Gypsy has featured in popular movies and television shows like Will Smith’s I Am Legend and The Simpsons’ “Mom and Pop Art” episode, among a lot others.

The Hungry Lion Throws Itself on the Antelope, 1905 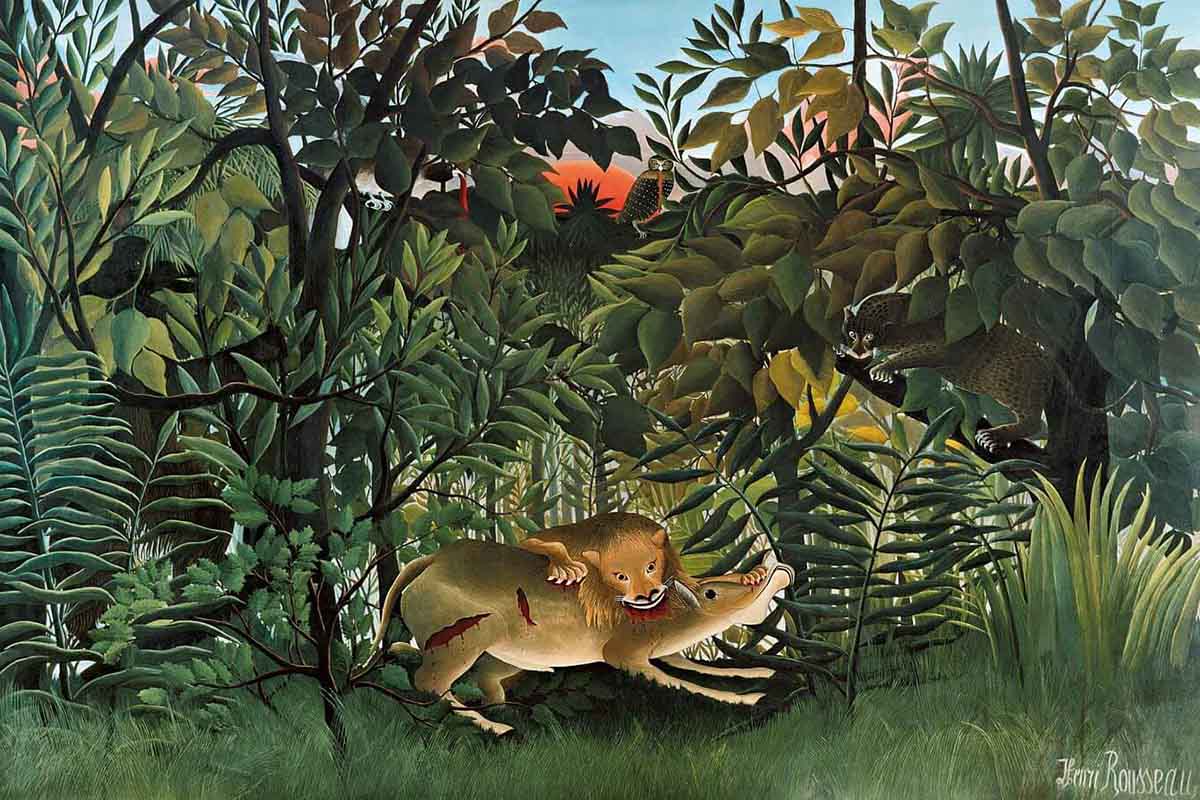 Known in French as “Le lion ayant faim se jette sur l’antilope,” this Henri Rousseau’s art marked his return to his Primitive jungle painting style. It is a painting of a lion catching its prey, with other wild jungle animals like a panther and owl waiting atop trees to have their piece of the downed animal later.

The Henri Rousseau painting is one of the artworks that served as inspiration for naming the Fauvism art style, even though he didn’t apply it to his works. As it was displayed in the same room at the Salon d’Automne alongside Donatello’s sculptures and works from other avant-garde artists like Henri Matisse and Cezanne, Louis Vauxcelles made a mention of “Donatello chez les Fauves – Donatello among the wild beasts.”

The term then became popular for artworks applying strong colors with impressionism. Today, The Hungry Lion Throws Itself on the Antelope is displayed at the Fondation Beyeler in Basel, Switzerland.

Commissioned by Berthe, the mother of Robert Delaunay, who co-founded the Orphism Art Movement with his wife, The Snake Charmer is another intriguing and famous Henri Rousseau piece.

The Musée d’Orsay calls the charmer “a black Eve in a disquieting Garden of Eden.” It depicts a woman with glowing eyes playing the flute to call out snakes from the thick jungle vegetation, with all significant subjects darkened against the moonlight.

Exhibited in the Salon d’Automne in 1907, the piece was held for over a decade by Jacques Doucet, a popularly known fashion designer and enthusiast. It was eventually displayed at the Louvre in 1937 and currently sits at the Musée d’Orsay. 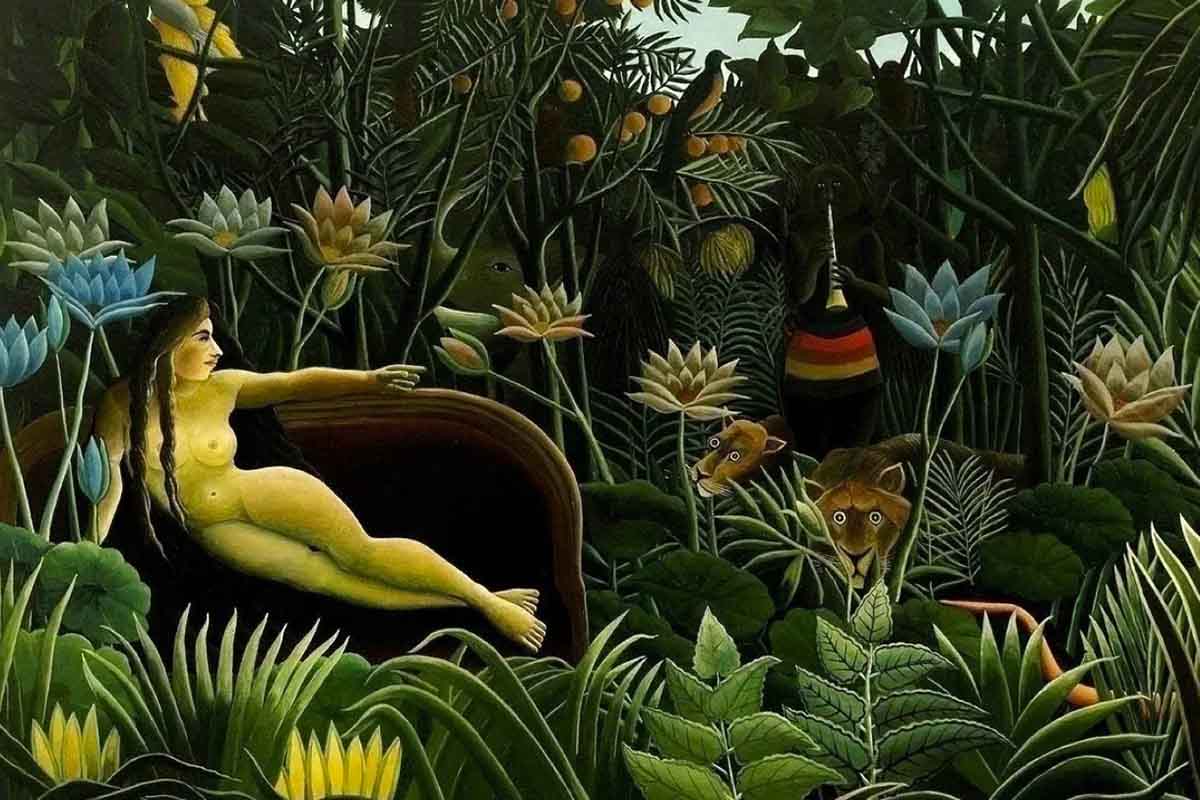 The 1903 Portrait of Clemence is not one of the best Henri Rousseau paintings but is one that ultimately led to, perhaps, the most popular event defining 20th-century art. How? Well, Picasso bought it from the street-side as a canvas piece for the paint to be applied and thought he was the first to discover Henri Rousseau.

A young Picasso became a fan of Henri Rousseau and, in 1908, held Le Banquet Rousseau in respect to him. The banquet was in Picasso’s studio and attended by a barrage of famous French avant-garde artists, including Guillaume Apollinaire. The avant-garde was a less popular art style during this time, and the banquet represented the beginning of its revolutionary but short-lived takeover.

After this, The Dreams, another one of Henri Rousseau’s jungle paintings, was displayed in the Salons des Independants in 1910, just five months before his death. Guillaume Apollinaire, a close friend of his, wrote the epitaph on his tombstone.

Henri Rousseau may be regarded as an unlucky participant in the avant-garde movement, as the painter received repeated criticism of his work till his death in 1910. Nonetheless, his works over the years made him increasingly popular amongst his peers and are regarded as one of the best avant-garde pieces today.

Delivery of Fine Art Pieces: Finesses an...
December 02, 2022
What Painting Made Henri Rousseau Famous?
October 03, 2022
5 Best Places to Visit for Arts and Cult...
September 28, 2022
Previous article Next article
About Author

Life Hacks to Live By
So Connected: How to Increase Intimacy in a Relationship
April 12, 2021
6 Tips To Help You Keep Looking Like A 21-Year Old
October 23, 2018
Can Vaping Really Help You To Quit Smoking
August 02, 2018
Ads
Stay Connected
Where to buy medications ? How to cure impotence with pills? You can buy sildenafil australia online easily. For Thai customers look at priligy thailand online. In Singapore find viagra singapore for sale.